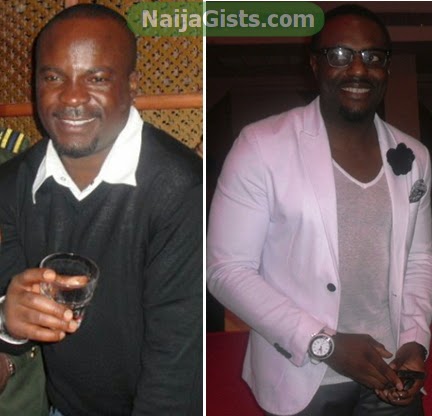 For the second time in 2014, Nollywood actor and reality TV show host Jim Iyke has been involved in a serious car crash.

But luckily for him, he survived with no injury.

The crash happened on a movie set on Wednesday afternoon.

The accident was so severe that the upcoming Nollywood actor popularly called Totolos is said to have fallen into a coma.

Nollywood insiders who contacted NaijaGists.com today said Emmanuel is not responding to treatment at an undisclosed hospital in Asaba.

HOW THE CRASH HAPPENED.

We learnt Jim Iyke and the budding Nollywood star were filming a movie that required a stunt involving shooting guns while driving.

Jim Iyke was driving while the other actor was supposed to shoot a gun through a half opened door.

All of a sudden, Jim’s car suffered brake failure, he swerved suddenly and Totolos lost his balance and collided with a moving car on the road.

The actor suffered a broken skull and fractured neck. He became unconscious on the spot.

As at the time of this report, Emmanuel Ehumadu‘s wife has travelled to Asaba to stay by his bed side.

He is still in a coma and his condition is very critical.

Jim Iyke survived the car crash with no injury.

These Nollywood actors must be careful with these type Jackie Chan-like stunts, it is very dangerous.

Please remember Emmanuel in your prayers for quick recovery.