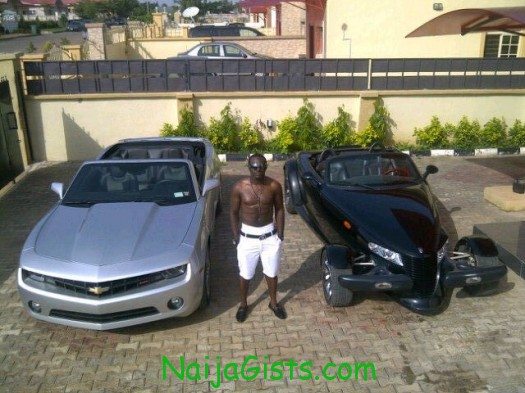 According to a report we obtained from Nigeria Films, talented Nollywood actor James Ikechukwu Esemugha aka Jim Iyke is once again in troubled waters.

As at the time of this report, Jim Iyke is no longer sleeping in his Abuja mansion.

The problem responsible for his escape from home has nothing to do with the alleged N15 million court case.

According to information gathered,he got into fresh trouble over his acclaimed brand new Cameron SS Convertible and Plymouth Prowler Convertible cars worth N16 million.

As revealed by insider sources,Jim is not the original owner of the two wonders-on-wheels which he claimed to have bought last month.

We reliably gathered that the two expensive cars were handed over to Jim by his close friends who is based in UK to take care of pending when they will return to Nigeria and have need to use the cars.

Rather than adhering to his agreement with his pals,Jim not only hit the streets of Abuja with the automobiles but also alleged falsified information that he acquired the two cars for N16 million.

According to his close pals,the truth about the real owners of those cars came to the open last week when they stormed Abuja and demanded their Camero SS Convertible and Plymouth Prowler Convertible from the talented actor.

Jim’s close friends who begged anonymity disclosed that on seeing the cars they became furious and insisted that Jim has on the process of using their cars inflicted damages on them,after minutes of argument they told him that the case will be settled at the Police Station as they were ready to invite the Police over.

Immediately they left his compound,Jim allegedly ran away from his house and left the two cars where his embittered friends can easily pick them and leave in peace.

They equally revealed to us that the Nollywood actor gave the media false information concerning the cost price of these automobiles,as they got the cars with N13.3 million.They insisted that they got the dark color Plymouth Prowler for $43,000 while Camero SS went for $40,000. naijagists.com

However,Jim had already left his mansion when they arrived with the Police;it was informed that they quietly left with their cars.It is not clear if Jim has moved back to his house now,as sources informed that till penultimate weekend,Jim was still unable to return to his house.

It was equally disclosed to us that most of former posh cars paraded by Jim Iyke do not really belong to him,as his friends who are based in UK,US,Europe and Canada usually give him cars to keep for them till their return,while others send cars for him to sell. naijagists.com

In these situations, Jim is said to have flaunted the cars as if they rightfully belong to him.

Join Jim Iyke in your prayers. This guys who recently underwent Anger Management training seems to be going out of control. God please save Jim.

Is Mercy Johnson Really Dead? Did She lose An Eye… Find Out Here
Genevieve Nnaji Spotted With Shaggy At Abuja Party