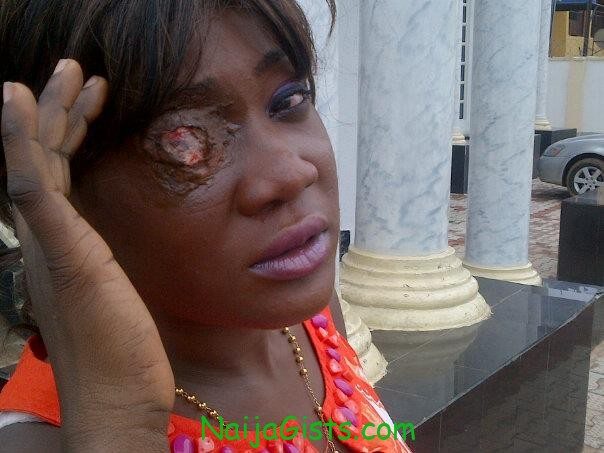 The above photo of  Nollywood Actress Mercy Johnson with blind-eye make up on set of a movie directed by Michael Jaja.

According to her PR release, the rumour of Mercy Johnson‘s death might soon surface all over the net so be informed she’s not dead, she’s just acting dead (lol). Read her press release below

As at the time of writing this, blogspheres and entertainment industry is awashed with rumour that star actress, Mercy Johnson suffered blindness and experienced a terrible accident that led to her death.

This rumor has no resemblance or iota of truth. Mercy is on a movie location in Lagos and getting set for her trip to Australia in a matter of days.

After diligent investigation, we discovered the rumour started as a result of a publicity stunt initiated by producer of a movie where Mercy’s character lost an eye. Another part of the rumor was started by detractor whose only goal is pull MJ down by all means.

It is despicable to note that these rumors were strengthened by writers who did not crosscheck before posting on their blogs, platforms or newspapers. We decry this act of insensitivity and irresponsibility especially as it affects family, friends and fans.

We appreciate family, friends and fans that have taken time to call out of concern and love and we wish to let them know that mercy is hale and hearty.

We implore bloggers and writers to kindly cross check reports on mercy with us to avoid using their platforms to promote falsehood and abate inappropriate ‘’PR stunts’’ by those who want to sell their movies or those whose goal is to pull others down at all costs.

Thanks for your understanding