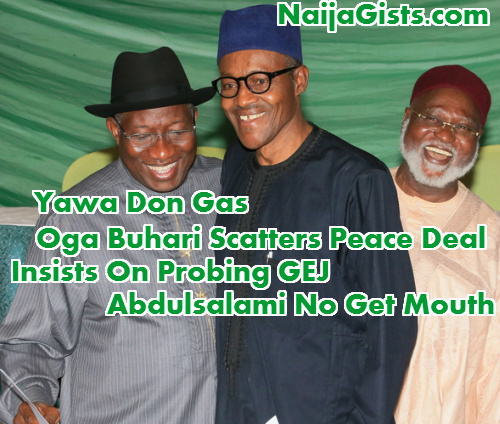 According to Presidency sources, the immediate past President Goodluck Ebele Jonathan has started running from pillar to post after Buhari suddenly changed his mind and insist on probing him after massive evidence of looting was found in GEJ government.

As we speak, many of Jonathan’s ministers have relocated abroad in order to escape jail.

According to sources, Buhari has decided not to compromise his focus to “retrieve” ill-gotten wealth from some top officials in Jonathan’s administration.

A source said: “Jonathan had approached the Abdulsalami Committee to intervene and prevail on Buhari to stop scandalising his administration and haunting his former aides/ ex-ministers.

“Jonathan has been saying that Buhari’s attitude so far was not yet in line with the peace agreement the two leaders entered into before the 2015 general elections.

“But the committee members, especially Abdulsalami, have not been able to have audience with the President due to the President’s tight state duties or commitments.

“The President hosted ex-President Olusegun Obasanjo to a dinner to break the Ramadan fast. But the two leaders could not talk much on the state of the nation as Obasanjo insisted on going back to Abeokuta at 9pm, The Nation learnt.

“So, Jonathan has really run into a brick wall in his plans to seek soft-landing for some of his aides and ex-ministers,” the source said.

The pre-election agreement between Buhari and Jonathan does not cover shielding corrupt suspects from prosecution, the source added.

A source in the Presidency said: “We really do not know what agreement Jonathan and his group are talking about. The Abuja Accord and the Peace Agreement border on peaceful conduct of the 2015 elections, free and fairness of the process, acceptance of the outcome and the preservation of the nation’s unity.

“There is nowhere it is stated that those who looted the treasury should either not be questioned or legally arrested by the relevant agencies.

“It is important to clear the air on this matter. What the President promised was not to witch-hunt. And he even said ex-President Jonathan had nothing to fear.”

It was learnt that some former ministers with sensitive portfolios where funds were mismanaged have relocated overseas.

Although most of these ex-ministers promised to return home any time they are invited, only two or three of them have been coming to Nigeria.

A former minister said: “I have been around. I have not gone anywhere. I am trying to earn my legitimate living.

“The former President said he was in a cage while in power. I have also realized that we were all in a cage. We have to support the present administration to succeed.”

Another former Minister said: “Some of us have tried to lie low because we have paid our dues. We only need to rally round the new government.”