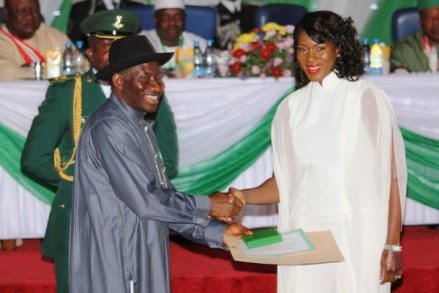 It was yesterday on 29 September that President Jonathan confers over 300 national awards to various Nigerians including his driver and cook. It was the first time Nigerians from such background make it on the list after over 3 decades of instituting the award.

The highlight of those that received the award was the designer of Nigerian flag that received the award of CON from the president. Also the President put him on life salary by making him a Special Adviser to the President. The President deserve recommendation. Most Nigerians heroes are not honored during their life time. The designer of the flag should have long been honored and respected, unfortunately, it was only now that he received his rightful title.

Most of those that made it on the list were government officials. Minister, Permanent Secretaries, Governors, various head of MDAs including Police, Military and Paramilitary etc.

The question we all need to ask is the criteria been used to select the recipients. According to reports, the national youth council has already criticized the award saying their was no youth selected despite the fact that there are young Nigerians that deserve the honor. There are about 90 million Nigerians that are considered youths. The youths are the future of this country and must be included in the governing of the affairs of the nation.

The national award for it to maintain its integrity, it must be non partisan and sentiment should not be allowed in. In many countries where the award is important, you tend to find that even the President may not have the apex award. Contrary to Nigeria where and current all former President(s) are GCFR, former and current Vice President(s) GCON, all former Chief Justice GCON, all first class Emirs CFR, all service Chiefs, Minister, governors, and even head of departments are awarded various award. In my opinion, the simple criteria is just try to become high ranking person, politicians, or simply become and Emir. I must say that I hold my leaders esteem and I respect them. Especially those that are real leaders and are always connected with the masses.

What I personally want to see improve in this national award is that, the criteria for the award should be made tight, the number of annual recipient should be reduce by two third, the award be given only after 3 or 4 years, and finally all those privileged politicians leaders and Traditional leaders be excluded from the automatic list, that will surely make the award worth receiving.