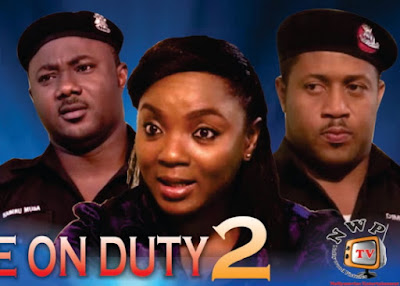 April 1st, 2016 – How Nollywood Is Damaging The Image Of Nigeria & The Nigerian Police Force All Over The World

Nollywood movie watchers cannot miss the despicable manner policemen and women, officers and men, are portrayed. They are presented in the most embarrassing manner imaginable. Torturers. Unimaginative. Unintelligent. Murderers. Armed robbers. Kidnappers. Those who connive with criminals to do the despicable, including rape. They are involved in all kinds of crimes, the least of them: bribe taking. As far as Nollywood is concerned, there is no good policeman or woman. They are all rotten.

Movies are make-belief. They are written and acted to be as real as possible. The portrayal of Police personnel by Nollywood is nowhere near that. It is a scandal. A big shame on both the Police and Nigeria as a country. Neither their manner of speech, approach, behaviour, dressing, interrogation, nor even the vehicles they use represent the Nigeria Police or its personnel.

Nollywood is a global brand. During an informal discussion a few of us had a couple of years back with the former Minister of Finance and Coordinating Minister of the Economy, Dr. Ngozi Okonjo-Iweala, she confessed she never took a look at Nollywood movies until she went to Nairobi, Kenya, for a conference. There, she saw high profile Kenyans watching and discussing Nollywood. That was when she took note, and became aware of how much the industry has contributed to the Nigerian economy. Sure.

It is not only influential, it is one of our notable exports. Is that not why Time Magazine noticed Nigeria’s actress, Omotola Jolade – Ekeinde, and recognised her as one of the most influential persons in the world? It also mirrors our everyday lives and, in a way, shapes it. And, not only does it get rid of our stress, it contributes hugely to our economy. Sadly, however, it is also damaging the image of Nigeria. The movies are watched the world over. Nigerians in the diaspora have an affinity with Nigeria, at times, by watching Nollywood movies. Quite a number of them, for reasons best known to them, believe the worst of their country, Nigeria. Not surprising, they worry about the security situation. Aside from Boko Haram, those of them from the South worry about kidnapping and armed robbery.

So, when they watch these movies, and see the despicable roles police play, they shrink, and conclude that coming home is dangerous since the police, instead of protecting them, or being their friend, would connive with criminals and do them in. That is the shocking impression Nollywood has given the world about the Nigeria Police. But worse is that all these years, succeeding Police authorities turned a blind eye to this disgrace. They cannot feign ignorance of this damage. And I don’t believe they are helpless.

As a Commissioner on the Police Service Commission, I am embarrassed by it. The other day, one of the girls in my house asked me: “Sister, why do these policemen treat Nigerians this way? Why can’t you people stop them?” Until I explained, she had no way of knowing that what Nollywood is presenting is a far cry from the behaviour and operation of the Nigeria Police.

I had cause to discuss it, recently, separately, with both IGP Arase and the Chairman of the Police Service Commission, Mike Okiro, himself, a retired IGP. Arase said he had, once, discussed it with the National Film and Video Censors Board. Okiro told me much the same. But after that, what next? What were the actions taken? Who has been punished?

For the records, it is not only the Police that Nollywood is using to destroy Nigeria’s image. The industry has also presented Nigeria as a country of fetish people, a country of juju. It is nauseating. The juju damage to the country shone through, recently, during the African Viewers Choice Award (AMVCA) which held at Eko Hotel and Suites, Victoria Island, Lagos. Salvador, a Comedian from Uganda, described Nigeria as the ‘land of juju’. That is the image Nollywood has created about our country. Nollywood should refocus. Nigeria has a rich culture, and Nollywood can portray them.

We are also a compassionate and hard working people, and we have remained one country in spite of our ups and downs. We are not all about juju and crimes. Internationally, our police personnel remain some of the best.

But back to Arase and Simon. When the Constable asked the questions, taken-aback, Arase praised him for speaking-out, for his courage, for his concern for the image of the Police. He also expressed his own concern and worry, and promised to take action. As a reward, he promoted him, deservedly, to the rank of a Corporal, and decorated him immediately.

Let’s hope that the concern of this policeman will push the IGP, Okiro and others to stop Nollywood from a further destruction of the image of the Nigeria Police and Nigeria before the world. It is disgraceful.