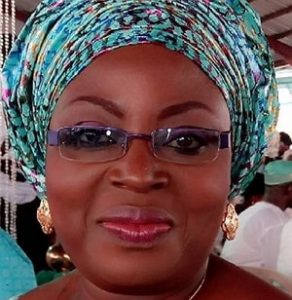 Here is what Jumoke George told Yoruba Movie Gist Magazine about her role in the movie and how she put her trip to Rwanda on hold to take part in the interesting movie.

How can you describe the role you played in a new movie, Aala Ife?

Firstly, I so much love that title, Aala Ife literarily means Boundary of Love. Everything in life has its own boundary. Even our creator set boundary between us and that is why there is heaven and earth. If there is no boundary in your love life, you may not enjoy peaceful marriage. Things will not be in accordance.

There must be a boundary in the love that exists between parents and their children, same with couples, especially from a man to his mum and his wife. In a relation, if you fail to put boundary where you are supposed to indicate it, different calamity will be surfacing in the union on daily basis. So, everyone needs to have this theory at the back of his/her mind before going into any relationship or marriage.

How easy was it, for you to play the role perfectly?

The role I played wasn’t only touching but very emotional. I don’t pray to witness it in my real life. But if I have a daughter in-law who maltreats me that way, I will say a word of destruction into her life. This is because; there should be limitation in everything like I said earlier.

If didn’t give birth to my son, where would his wife see him before they both agreed to marry? I am not saying love shouldn’t exist between lovers, but we women needs to reason this fact before we give judgement on the love a son has for his mum.

The role was not only challenging but very pathetic and emotional. The character of the mother really suffered and that is the role I played. She had to go through a lot of pains simply because she was loved by her son, and he made it obvious to everyone in the house.

We learnt that you were supposed to leave Nigeria for another location in Rwanda which you later turned down because of Aala Ife. Why did you do that?

You are right. I am really happy with this question. First and foremost, I appreciate the efforts of my director, Okiki Afolayan. I pray he will not know how important he is in my heart; because the day he knows is the end of the respect I have for him. He is a guy I so much admire and appreciate despite the age. God blesses him with wisdom, knowledge and understanding which many elders don’t have.

He doesn’t compromise, no matter who you are. When he told me about the job, “Aala Ife”, I showed him the details about my movement and he realized that I was to play a major role where I was going to. He took his time to convince me. Indeed, I have collected money from the international producer but when I saw the script of Aala Ife, my mood and everything about me changed.

I was of the opinion that what did this guy see in me before he opted for me? Or what made him think that I am the perfect person to interpret the role better? Of course I knew I can deliver the role perfectly. I told him okay, let me make a call and I placed a call to speak with my international director and executive producer. I told them the issue I have at hand here in Nigeria because I hate lies. Okiki heard everything when I made the call and he saw the document for my traveling and the script of the job I was going there to do.

The director adjusted my date with days so that when I am done here, I can fly immediately. I was called more than 10 times to know if I had finished the shooting of Aala Ife even when I was still on. Immediately after the shooting, I left to meet them. Thank God for the success of the job. I have been receiving calls since the job was released online about a month ago.

Boundary of Love “Aala Ife” is currently showing on Libratv on Youtube. Believe me, you won’t regret watching it because I know the efforts myself, Femi Adebayo, Liz Da Silva, Ayonimofe Onibiyo, Ladi Folarin and others put together to make the job a success”.