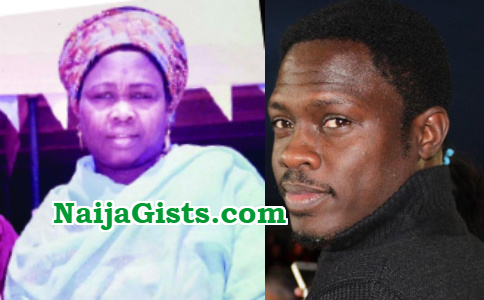 The Kannywood actor who is among the talented movie stars taking over in Northern Nigeria recently remembered the woman who brought him into this world.

The producer, dancer and scriptwriter shared fun memories of his late mother in this recent interview with Daily Sun.

My mum’s name is Fatima Kardiram Digirema and she was from Bamam village in Borno State.

She was a teacher but after a while, she became a headmistress and later worked as a caterer.

What are your memories of her?

Wow! I have many beautiful memories of her. For instance, she single-handedly encouraged me to go into acting. I remember when I first told her I wanted to be an actor; she told me it was good and that I should go ahead. Considering the fact that I have always been a television person from childhood, I guess that made her see that was all I wanted to do and she supported me fully. Unfortunately, I lost her the same year I started acting.

What happened to her?

She was ill. You know that was what we were talking about earlier; our healthcare system is not as it should be. She fell ill and died.

How long ago was that?

What was her best advice to you?

What I always remember is that she told me that wherever I go and whoever I associate with, I should live in peace with them. That is the first thing she told me. Secondly, she said I should be humble and thirdly that in whatever situation I find myself, I should always remember God.

What was her favorite dish that you enjoyed most?

As a teenager, what always brought you at loggerheads with her?

Okay, when I was a teenager, my biggest problem was that whenever I wanted her to buy something for me and she didn’t, I gave her all manner of trouble and she was very angry with that. In fact, at a point, she started calling me the official troublemaker. She even bought a tee shirt in the US for me and on it was written ALI- official trouble maker (laughs).

Your mum was educated but you know many women from that generation weren’t. How did she scale through?

Yes, my mum was educated. When she lost her father, her mother married another man and she was taken to her father’s family home, which happens to be a large family.

So, because her father was not alive, when the missionaries came to admit pupils in school then, she was taken along with all the boys in the house. None of the other girls were taken, she was the only one. Fortunately for her, she was very brilliant and a lady among the missionaries was interested in her.

The lady was impressed with her intelligence, so she kept on encouraging her until she completed her studies.

Subsequently, she worked in a primary school as a teacher and she rose through the ranks and became the headmistress.

One of her students contacted me recently and said, “…You have to be proud of your mother. Your mother was a very good woman; go to YAWA Special Primary School today, her name is on the board of the people that headed the school.”

As a teenager, what did your mum tell you about girls?

I grew up among people from different tribes and religions. It was like “a no man’s land.” There were Igbo, Yoruba, Igala, Kanuri, Hausa and everyone lived as one. So, we just grew up with the girls like we were one big family.

I cannot specifically say there was a time she did such. But I know she warned me about smoking because I had this nephew that smokes a lot and she says please, please, don’t be like him.

What do you think you inherited from her?

Yes, the traits I find very obvious that even my siblings tell me about is that people love me just like she was loved by people, because she was like the mother in our street. She cooked for anybody who came to our house and said “mama I’m hungry.” Most youths in the area gathered in our house and that’s a similar situation with me now. Most of the youths here like rallying around me. They stay with me and I’m fortunate to have a wife that is very understanding too.