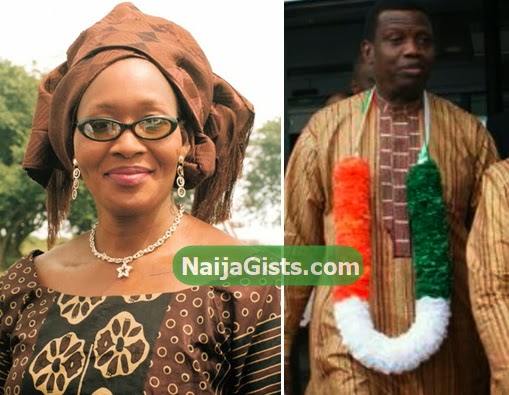 Controversial daughter of former Oyo State Governor Victor Omololu Olunloyo,Kemi is back with her Facebook wahala.

The Canada-based socialite who suddenly find herself in Nigeria after being deported from Toronto in August of last year is now claiming authority over the capital city of Oyo State, Ibadan.

The Ibadan local champion is popular for abusing men of God on her Facebook page.

The latest man on her agenda is the General Overseer of the Redeemed Christian Church of God, Pastor Enoch Adejare Adeboye.

Hours after a scheduled rally at Adamasingba stadium was cancelled by Pastor Adeboye, Kemi has taken credit for the cancellation.

Hear was she told her fans yesterday:

People are starving on the streets and many don’t have light or water. Adeboye is not planning to move around the city today to give to the poor. Instead, he is planning to cause fanatical gridlock around Adamasingba.

I simply told RCCG, I will organize a poverty PROTEST. Take that rally to Borno state. He’s heading to Ilorin now in his private jet.

#BREAKING Adeboye’s trip to Ibadan tomorrow CANCELLED!
No more rally at Adamasingba stadium.
This city does not need fanatism.
#Wonderful
7 days to go!

I am the MOST hated woman in Nigeria now just like Kim Kardashian is the most hated in America. We are LOVING it.  BE HATED! Don’t HATE!
RCCG COUNTDOWN: ZERO more days and its over for Pastor Adeboye.

Good Morning Ibadan. To all my REAL loyal fans in this city, THANK U for helping me SUCCEED in stopping Adeboye’s Expressway church from infiltrating our city.

We don’t need all that here. Our people are starving on the streets and many don’t have light or water. Adeboye is not planning to move around the city today to give to the poor. Instead, he is planning to cause fanatical gridlock around Adamasingba and a total disaster that will cost our city MONEY we have to pay the NPF to direct traffic and many of you stuck under Mokola bridge on your way to Shoprite for food shopping.

Take that nonsense elsewhere. I counted down here that it WON’T happen cos GOD said so. Not today, I wrote them that I will organize a huge protest disrupting his preaching. We don’t want fanatical Christianity anymore.

Since her deportation from Toronto last year, Kemi Olunloyo has never been the same.

This is the same woman believing God for a husband before Christmas.

Hmmmm may God deliver her.