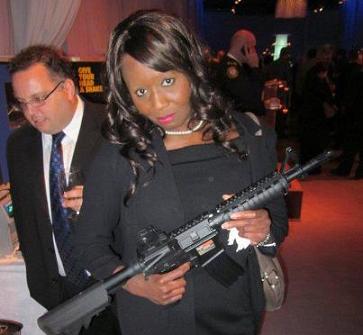 For those who do not know her, Kemi Olunloyo is the former daughter of Oyo State Governor Chief Omololu Olunloyo.

She was deported from Toronto, Ontario, Canada to Nigeria in August 2012 after losing her immigration battle.

The self-proclaimed community activist is popular for her controversial use of words.

If you notice she has become a major news maker on several Nigerian blogs for the past few weeks and she has never stopped pushing herself to the spotlight.

To cut he long story short, Kemi Olunloyo has turned her Facebook page into an haven where she expresses her mind without reservation.

Her last update was on five machine guns in her possession.

Below is a recent update from Kemi Olunloyo;

It’s true #BLOGGERS! I owned 5 #Guns in #America. They were legal and we are allowed to kill intruders! On the rumour going around, its no rumour, those guns entered Ng via my container. I carry SigSauers around for my protection. I got at least two at all times so that if I need back up (Cowboys and Indians) I can continue shooting my attacker. This is a country where we have NO emergency First responder system in place (911 and 999), Kidnappers, Rritualists and no credible police. I’m UNTOUCHABLE! 2 shots I’ll send you UP to see Tupac, Princess Diana and Michael Jackson. All armed robbers in Ibadan always stay home when I go out!

The 48-year-old single mother of one is currently based in Ibadan, Oyo state.

According to a source who wrote NaijaGists.com few hours ago, this woman is fully aware that she is posing herself as a danger to the community.

Below is a little message from Oluwakemi Fiwasayo to Kemi Olunloyo:

Kemi you are fully aware you are threatening the society. You’re once a US citizen as myself…It is very obvious you are battling a mental health issue.

Being a former Governor’s daughter does not exempt you from going to jail.

We are tired of hearing your threatening gun stories…

A word is enough for the wise. I’m keeping a close eye on you.

Nigerians please note that Kemi Omololu Olunloyo is battling a serious mental issue. I’m very close to her family and I’m in the best position to tell you this.