Nigeria’s most controversial Facebook personality, Ms Kemi Omololu Olunloyo is in a messy fight with Oyo State Police command after her youngest son, Kayode Joshua got injured in what she called a tragic bus dragging accident that happened this past Saturday. 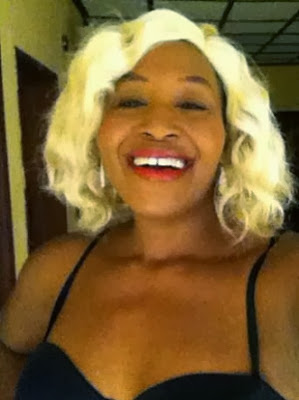 This is where the accident happened on Saturday

Read what happened according to Kemi:

This event happened 6pm Saturday November 2nd 2013 in Ibadan Nigeria. I have not been contacted by any Government official or law enforcement. Today is Tuesday November 5th 2013.

Major incident just happened in Ibadan. I am upalled and very sad. My youngest child was dragged by one of Gov Ajimobi’s transit buses at 6pm tonight. While I was trying to help a woman with a small child, the driver moved and refused to stop as my child was caught outside the bus. Many ppl kept telling him to stop and the ignorant conductor was telling me to shut up. I wrestled the steering wheel from him in a crowded bus and took the keys off the ignition with over 80 ppl in the bus. This is what I had to do to save my childs life. It is a disgrace and dark day in Oyo state today. I navigated the bus to the front of a police station.

IF THIS IS THE NIGERIA WE ARE LIVING NOW, IT HAS TO CHANGE.

More to come. I will be speaking with the media and Governors office.

KJ suffered hand injuries. All along I was screaming my name and at one point ppl were telling him I was Governor Olunloyos daughter. He said he did not care if I was the presidents child. This is to show you how citizens are treated daily.

I have just released the bus keys to the police. I am a few public figures that take public transportation in this city in order to mix with the masses and to have this happen to me is a shame not withstanding my son could have been run over by other vehicles if detached from that bus.

This is a live photo of the bus at 7.30pm. The police just dropped me home. My son is in stable condition.

Hear what Kemi said in a report she released on the case today:

“I have LOST All respect for Nigerian Police Force in Agodi Gate and Ibadan as a whole. I am demanding a meeting with the Oyo state Police Command. Not only did Sgt Wale Samuels not arrest the bus driver that almost killed my kid, he also may have blood on his hands.

I was just briefed about the death of a pregnant woman at the same spot on Thursday. Police was trying to collect a bribe fine from a danfo driver when the bus ended up CRUSHING A PREGNANT WOMAN TO DEATH TRAPPED BETWEEN ANOTHER CAR. Several eyewitnesses are now telling me that they quickly whisked the officer away to avoid being lynched. We must expose these cover ups.

Just 6 days ago at my grandmas Fidau, Governor Akala threw money at ppl in my compound and it was two police officers with AK47s fighting for the cash. I had to get their Superintendent to break up the fight due to gross misconduct in my compound and send them away. What if the guns discharged?

Should there not have been a DETAILED police report on the bus dragging incident?”

What a handsome boy! Wishing him quick recovery.