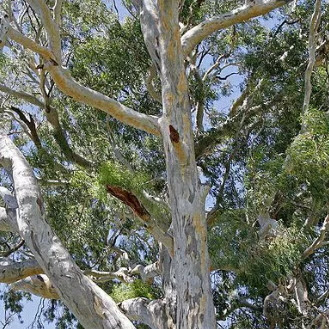 A Kenyan Pastor has declared war on the kingdom of darkness who brought down his airplane while heading to Jerusalem using an artificial wings he created on the instruction of God who invited him in the dream.

According to Standard News, Pastor Nwanga Gwranja told his followers at The Labourers Assembly Church in Bomet County Kenya during his Sunday Sermon that God invited him to Jerusalem in the dream.

According to residents of Singowet ward in Kenya, Pastor Gwranja who predicted the second coming of Jesus on several occasions performed a stunt he has never performed shortly after he went round his village to announce his departure to Jerusalem.

Shortly before he ended his sermon this past Sunday, he announced his departure spot, a tall Eucalyptus tree to his church members and village residents. He invited them to come and bid him farewell.

His followers were shocked to see him tie an improvised wings made of polythene bags and rags to his shoulders.

He soon climbed the tall Eucalyptus tree to begin his onward journey to Jerusalem as a huge crowd watched in disbelief.

When the crowd noticed Pastor Gwranja might commit suicide, they informed the village Chief who in turn called police and ambulances for emergency rescue.

His close friend, choir master convinced him to abandon his flight to Jerusalem and climb down from the tall tree but he ignored his request insisting that he must fly to Jerusalem.

He once more inspected the rags and polythene bags he attached to his shoulder before embarking on his flight.

Elders even tried to convince the adamant Pastor to come down and receive their blessings before taking off, but he rebuked them saying God was showing him the elders burning in hell for trying to stop him.

Shortly before he took off, women and children who feared for the Pastor’s life were seen crying but that didn’t deter him.

In their last attempt to rescue him from the grip of death, the elders of the village ordered a man to climb the tree and get him down.

When Gwranja the wonder pastor noticed that the man was almost catching up with him, he spread his wings and took a plunge.

He came tumbling down with a thud, and immediately began wailing, asking for help.

His legs were broken, his nose bleeding before he eventually passed out.

He was rushed to the hospital where he is expected to recover.

Even in his condition, he still insisted that the kingdom of darkness were the ones who crashed his artificial wing.

He promised concerned church members who visited him on his hospital bed that he will honour God’s invitation to Jerusalem after recovery.