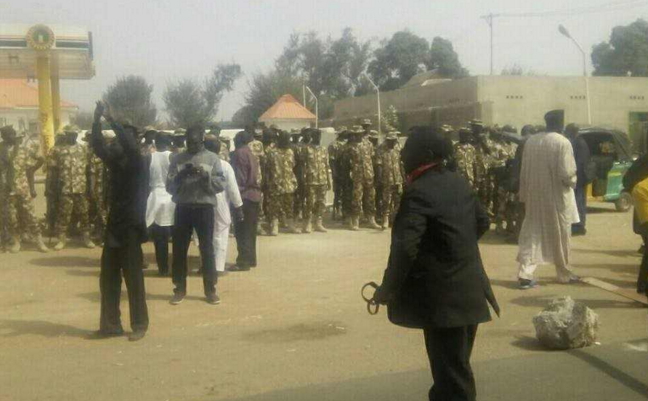 As many other Nigerians and foreigners, I highly respect Nigeria’s Chief of Army Staff, Lieutenant General Tukur Yusuf Buratai. Since rising to his top Military position, he has dramatically changed the narrative of the war against terror in Nigeria; reforming and transforming a helpless and dysfunctional, exploited State army into a successful and adequately deadly force against Boko Haram. At last the terrorists are on the run, deprived of supplies, recruits and modern weapons, now left to riding bicycles and using dane guns. Regularly seen in the midst of active troops, General Buratai has restored military morale and improved professionalism of the beaten troops.

However, the mistake or error of December 12 and the following days since demand our respected General demonstrate his exemplary probity by tending his immediate resignation.

While some other errors of our military may not be directly linked to the Chief of Army Staff as the Sokoto road massacre was, and may not demand his resignation as other officers my take the fall; General Buratai was there on the fateful day. He gave or physically oversaw the command. He is directly implicated and responsible.

The actions on Sokoto road are reminiscent of ancient Military authoritarian behavior not consistent with the 21st century civilization. It was an era where the Military command like the colonial master was an absolute and almighty imperious authority that anyone who disrespected must be beaten and put to death for. This attitude is inconsistent with modern civilization. Armed protests regardless of who is obstructed do not have to be put out with lethal force. Gaddafi was sacked by a global coalition allegedly for his crushing response to armed protest.

While the once bitten (July 2014 Nigerian army massacre) stick and stone wielding students on Sokoto road were belligerent and civilly disobedient, did they deserve immediate extermination for delaying the Army General’s passage to his function? No. For the simple reasons below:

The Army is only to be engaged in defined state of war and where a state of emergency or marshall law is declared. In all other instances, according to the Nigerian constitution, the police and mobile police are to be called. Except in Sambisa, and war struck Borno where their deployment has been approved by the National Assembly, the army is no authority on Nigerian streets. It is mobile police who know the rules of engagement to neutralize instances of civil disobedience. All that beating people in petrol stations and guard-room locking of offenders is illegal. The army can only be invited by the police as a backup.
The continued use of excessive force by the army, with further deadly attacks including the use of grenades on the Islamic Center and the home of Sheikh Zakzaky at 11pm that night, were further and continued illegal actions which only the police/mobile police are trained and authorized to conduct.
The raids on the premises and bulldozing of the the Islamic Center and Zakzaky residence by the army without court order or police authorization are additional illegalities.
For obvious reasons, the Military Chief defended himself by reporting the incident and attempting to justify their use of excessive and disproportional force as being a result of deliberate assassination attempt on his life. The question to ask is; did the army chief have to purposefully mow his way through a crowd of dissenting students? Could there be an alternative way to get to where he was going without having to hurriedly kill every one on and off his path? Was he headed to a national emergency? In his capacity, could he not call for a helicopter to transport him while possibly leaving the army there till mobile police arrive to contain the situation and arrest the culprits?

The Chief of Army Staff is the Chief protecter of civilians in Nigeria, not the Chief of civilian submission. His duties are limited to Military barracks’, emergency meeting halls and war fronts. He has no urban duty and if he gets into a brawl in a club, would be treated by the law no different from who he slug with.

It is unfortunate that significant Nigerians including members of the army, governors and those higher-up appear to be addressing national issues from sectarian positions. The disrespectful attack on the Shia Muslims in ways that no other group has ever been, with the crushing of their religious centers and humiliation of their highest authority, who does not even stand accused of terrorism or treason, reeks heavily of systematic and deliberate religious persecution with many similarities, unfortunately to that of Daesh. Cages and wheel barrows for transport of the subdued are an ominous trademark. Only the unreserved resignation of the military Chief and a thorough investigation and compensation “blood money” where due of the victims can restore confidence in the Nigerian government.

While as many as 200 bodies were deposited in the ABU morgue, as many as 1000 Nigerians are reported to have been killed in this horrific incident. This is serious and weighty. Hundreds more are injured and a potential 5-10 million minority, notably peaceful Shia Muslims feel deliberately repeatedly targeted and persecuted by the Nigerian government.

While the Kaduna government and northern governors have attempted to use this sad event to stop processions, which the group holds three times a year, the truth is that there was no procession on this day of death. The event being held was a sermon to usher in a new month and no procession was slated. The only individuals at the center at the time were travelers and organizers as the event was not even slated to have commenced. The government has the right to responsibly contain or ban “nuisance” processions, however attempts to malign the address and response to this particular massacre by these conflagrations are in poor taste; unless the deadly incident was staged as a pre-mediated tool to ban the “annoying” processions and crush the religious group. The same people who commiserated with Zakzaky last year, without an investigation having been done are persecuting him this year.

Thus far, the Shia Muslims have demonstrated exemplary character in Nigeria, by not resorting to violence in reaction to the current and past deadly aggression. While we are thankful of their spiritual and social anti-violence doctrine, which perhaps no other group in Nigeria and few others worldwide, apart from Monks are close in, we expect an attempt to similarly advance in character by the Nigerian authorities, who should learn from their former leaders currently in jail. There is no threat of Shia becoming terrorists; they never will. We should stop insulting them further with such utterances.

We can recall several incidents of armed protest in the recent past, including the post-election riots when Buhari lost in 2011. Those protests took 800 lives. While wherever armed protesters are inflicting deadly harm, they must be immediately put out, there was no report of murder by these youth, except the alleged attempt on General Buratai’s life. What if the Military under Jonathan had put out a similar crushing response to the armed Youth protesters, protesting Buhari’s election defeat? What if the Army then had bombed Buhari’s house without him being convicted of calling for the deadly armed protests? Has/was Sheikh Zakzaky convicted of staging the armed Youth protest on Sokoto road before the army took action against Shia Islam in Nigeria and the Shia leader?

Imagine the US deploying the army, not with tear gas and rubber bullets, but with live ammunition and grenades to mow down the Baltimore armed and violent youth protesters?

Rather than perhaps cook-up “evidence” of pre-event linking “intelligence” that Sheikh Zakzaky had a premeditated sinister plot to kill General Buratai and overthrow the Nigerian government, which led to the stationing of troops in front of the Islamic center at 12 noon on December 12th and the crushing response to the protesting youth at 3pm that day, we would advice the Military Chief to accept his reflex errors and resign.

Article By Dr. Peregrino Brimah, Every Nigerians Must Do Something