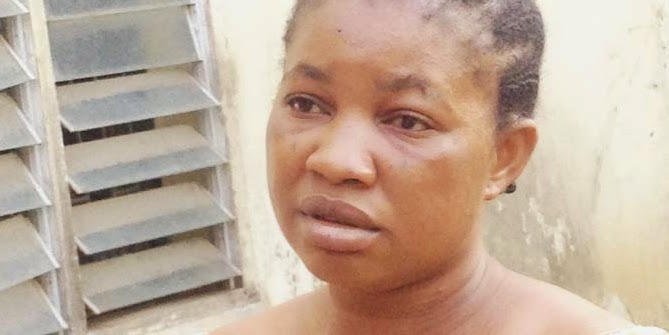 The police in Lagos have declared wanted a man whose stock-in-trade is using his three wives who pose as witches to defraud unsuspecting victims with false promises of a better future.

The suspect, Awosina Folorunsho and his wives Debo­rah, Hadiza and Folake got busted when Moses Okafor, husband of their latest victim, Helen Okafor trailed his wife to their hideout at Sango Ota in Ogun State. She was alleged to have paid more than N10 million to the syndi­cate before her husband got wind of their activities.

Despite alleged death threats, Moses summoned the courage and alerted the police at the Lagos State com­mand, Ikeja, where operatives of the Special Anti-Robbery Squad, SARS, were detailed to storm their hideout in San­go-Ota area of Ogun State where they arrested one of the wives, Deborah while Awosina and the other wives fled the compound.

According to the police, their modus operandi is to ad­vertise in major national dailies. As soon as their victims get in touch with them through the phone numbers on the adverts, they will devise different means including threat to life to extort money from them.

Sounding sober, Deborah, an indigene of Ekiti State, claims that her husband is a very popular herbalist in Sango Ota.

“He is a well-known herbalist and has customers across the country. His medicine is very potent, that is why people patronize us. This is an unfortunate situation. No one is after the woman and if I tell her, she will still go to another place and spend that money. It was the devil that took over us because we are genuine persons”, she stated.

According to Deborah, who said she is the first wife, it is a taboo to disobey their husband hence their decision to help his business to grow. “He is genuine but sometimes applies wisdom in convincing his customers. This is where we are needed. Recently, he called us that there is a woman who needs help and that we would consult the oracle for her. I did and discovered that nothing is wrong as she will make much money in 2015. My husband told me that she is rich and desperate. Since her future is already bright, we decided to take advantage of that. The whole money is with my husband. He has not given any of us our share from the business before police arrested me.”

How I fell victim –Helen

Helen’s desperation started when she noticed that a cer­tain neighbour’s shop had turned to a Mecca of some sort. “I own a cosmetic shop in Balogun market, Lagos Island. I have a neighbour who could barely pay her rent in the market. Suddenly, she was having so many customers and her goods hardly stay up to three days. She was always travelling to buy goods at least three times in a month and that is unusual. It was really embarrassing and I sought solution everywhere, all to no avail. It was then that my friend advised me to seek an alternative source of attracting customers. She was the one who suggested that I should read that particular newspaper.”

Helen claims that before her husband rescued her, she had lost more than N10 million to the syndicate. “I saw the advert in one of the national dailies. The advert was a solution to stagnant businesses. When I called them, they told me that it will only cost about N10,000 for prayers and buying the necessary ingredients.

“Initially, I went to see them at Mushin and I was given a form to fill with my passport. They took N8000 and told me that the money was meant to be used to buy all the in­gredients which include chicken, hot drink and some other things that would be used to appease the gods.

“During the consultation, the herbalist told me that it was my neighbours in the market that had stolen my star. I believed because my business suddenly started dwindling. I can hardly finish selling my cosmetics in three months.

“After much prayer, he said that we will travel down to Sango Ota to collect money that I will reinvest in my business.”

On getting to Sango Ota, she was ushered into a very big compound and asked to go and sit in the living room. “I begged him to get the money for me but he said that it is only the owner that will pick it or else it will lose its po­tency. When we got there, I was ushered into a living room that had red curtains all over. I was terrified but determined to improve my fortunes.

“Suddenly, the light went off and started blinking. I wanted to run out but discovered that the door was locked. It was then three women all dressed in white appeared. They showed me a carton full of money and asked me to go and bring N3million to cleanse the money and make it mine.

“Baba came in shivering and told me to do it or I will die. He said this was the only way I will have the opportu­nity to make it. By the time he calculated the amount need­ed, it was about N3.5 million. After seeing those women who claimed that they are witches of the land, I thought I will die. I quickly made available the amount and gave them”, she narrated.

When she returned, Helen said she was asked again to dip her hands into either of the remaining pot. “It was the same procedure but this time only two women appeared. I dipped my hand into the pot by my right and still picked pieces of paper. I must confess that I heard the sound of thunder and lightning. It was terrified, I begged for mercy while a voice shouted that I must appease the gods. Baba came in again and said that the evil spirits after me are so many. He assured me that the last pot contains what I needed. I was asked to bring N6million to handle the sac­rifice. I had no choice because I was scared for my life and secondly the future will be brighter.

“I returned on the agreed date to dip my hand in the third pot but my husband who trailed me, stormed the room and broke the pot. It was then my eyes opened. Inside the pot was another paper written that I should bring N10million or my entire family will be wiped out. I guess that I was un­der a spell and I thank God for using my husband to rescue me. I guess I was under a spell.”

The victim’s husband, Mr. Okafor said he became wor­ried when he realised that his wife was sneaking out of the house early in the morning and returning home very late. “I confronted her and she told me that she went to visit a friend in Sango. I was worried because this has never happened and the surprising part is that she will always sneak out of the house. On 28th January, 2015, I decided to follow her.

“I allowed her to enter the compound and followed her. I was not comfortable with the environment and I needed to know the secret my wife kept from me. I walked into the house and discovered that it was a shrine. They tried to stop me but I boldly broke the pot and they threatened that I will die.

They gathered us to drink all kinds of concoction and to also sign an undertaking that we hired them to perform rituals. We agreed and was detained for the whole night while witches including Deborah told my wife to try and complete the ritual. To escape from them, we agreed and was released the next morning. The next day, I reported the matter to the police.”

Continue Reading
You may also like...
Related Topics:fraudster, lagos, woman

Couple, Winners Of Who Wants To Be A Millionaire Nigeria Valentine Edition Kelvin & Nneka Speak
Bimbo: This Yoruba Female Name Has A Strange Dictionary Meaning