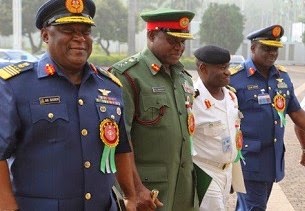 A federal high court sitting in Lagos, Southwest, Nigeria, this morning, restrained the Federal Government from deploring the military to supervise the forthcoming general election.‬

The presiding judge, Justice Ibrahim Buba, in his ruling declared that it’s unconstitutional to deploy military for the supervision of election purposes without the approval of the national assembly.‬

The ruling of the court, was sequel to a suit filed by Hon. Femi Gbajabiamila, a member of House of Representative representing Surulere Federal Constituency 2 on the platform of the All Progressives Congress (APC) against the President, Chief of Defence Staff, Chief Of Army, Chief of Air Force, Chief of Naval Staff and Attorney General of Federation.

‪In his argument, Seni Adio, lawyer to the plaintiff, argued that there was an allegation and evidence that military inhibit free movement, free access and intimidation of voters in states of Osun, Ekiti, and Anambra where military was deployed.‬

‪In addition, Adio argued further its not ideal to deploy military to supervise election in a democratic setting.‬

‪Consequently, based on these incidence of Osun, Ekiti and Anambra, he urged the court to refrain the defendants from using military in the forthcoming elections.‬

‪However, Mr. Dele Adeashina, SAN, opposed the application on the ground that the president being the Command in Chief of the Armed forces, is empowered under Armed Forces Acts to deploy military to maintain law and order.‬

‪In his response, Adio said Armed Forces Acts, is subordinate to the constitution of the federal republic of Nigeria.