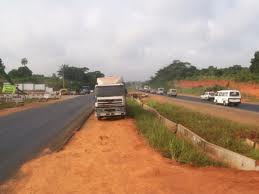 Several motorists as well as travelers traveling on the Lagos-Ibadan expressway are currently facing tough time as traffic gridlock is caused by several potholes on the road.

The potholes on Lagos Ibadan Expressway is causing traffic chaos from Pakuro junction to the Mountain of Fire Church camp which is giving motorists a hectic time.

Motorists spend over an hour in that axis of the road which under normal circumstances should not to take more than 10 minutes.

When our correspondent visited the area this morning, the gridlock was
so severe that hawkers on the expressway had a field day.

Some motorists who spoke with reporters expressed dismay over the issue and called on the government to do something urgently to reduce the stress on the road.

A motorist, Chief Emeka Ukachukwu, who said he was coming from Anambra state stated that he had spent over an hour in the traffic.

“This is terrible. I have been in this traffic jam for the past one hour. We were
told that the potholes on the road have been the cause of all this.I
want to appeal to the government to come to our aid. We cannot
continue like this in a civilized country,” he pleaded.

Another motorist, Mr. Adekoya Adewale disclosed that the government has not done what ought to be done on the road until another serious accident occurs.

“The government knows what to do but it is still waiting for more people
to die on the road before it acts.The potholes are too many and they
are very deep. If federal government is not ready to do anything now,
I want to appeal to Amosun to patch the potholes before it claims more lives,” he said.

A motorist who simply identified herself as Madam Chichi was seriously angry and decried the attitude of the government to human life which, according to her, has shown that the government does not care about the masses.

“Do you think we have a government? This place has been like this for
over three months and they too also pass through here. Why have they
refused to work on the road? They are waiting for when another terrible
accident will occur and then they will start to blow grammar.

Some men of the Federal Road Maintenance Agency (FERMA) were seen
around the entrance of the Mountain Top University with some tractors
doing some skeletal work on the road.

One of the officers who spoke with our correspondent under anonymity
disclosed that they are on ground to see how they can assist to
alleviate the suffering of the people on the road, adding that the
government is aware of the poor state of the road but delayed repair work because of the
rainy season.

According to the officer, “we understand the plight of the motorists on
the road and we are trying our best to see that the gridlock is at
least reduced to the barest minimum with the help of the security
agencies who are assisting in controlling the traffic.

“What we are here for is just to do some skeletal work on those potholes so that vehicles can be moving on a very good speed and I can assure you, if
not for the persistent rain, we ought to have finished the work during the weekend. But by God’s grace, we will try our best to see that by this week Friday, work is over on the road,” he assured.

The road which is a major link for those coming to Lagos, the economic
nerve center of the nation, has been in a deplorable condition for
years and it has caused several accidents which have claimed many
lives.

It was gathered that the construction of the road has been awarded to
Bi-Courtney Construction Company during the tenure of the former
president, Umar Yar’adua and work is yet to commence on the
express road.

Several accusations and counter accusation have been trailing the
project between the management of the company and the government of Ogun State over the road.

Which kind of government do we have in this country self?