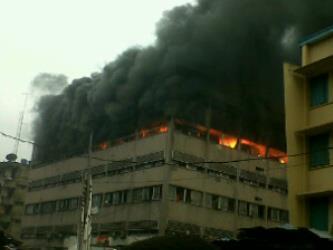 A serious fire outbreak that guts a 3-storey apartment building in Lagos Island over the weekend has injured 5 people. naijagists.com

The fire incident that occurred at 9 & 7A Obadina Street off Ali Street in Lagos Island on the weekend destroyed the 15 rooms apartment with properties in millions of Naira.

The 5 people that sustained severe injuries were hurt in an attempt to escape the fire.

A source said the fire started from the 3rd floor of the apartment as the room occupant wasn’t around when the mysterious fire caused by electrical spark started inside the room.

No one was injured in the mishap.