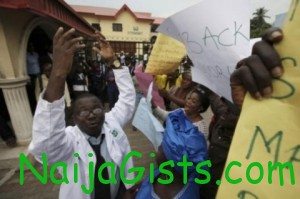 The health sector in Lagos State may soon witness another strike as the doctors have started complaining that the Lagos State Government arbitrarily deducted from their April salary and withheld May salary.

The doctors accused the state government of adopting measures to stifle members of the Medical Guild rather than addressing the issues on ground.

The state government had through a circular warned that health workers who embarked on strike would have their salary withheld and that it was ready to enforce the rules to the letter.

A statement from the Medical Guild in Lagos, Southwest Nigeria, titled ‘Update on Lagos Health Sector Crisis’  and signed by its Chairman, Dr. Olumuyiwa Odusote  said: “following the withdrawal of the illegal mass sack of 788 doctors by the Lagos State Government, and on receipt of recall letters by all the doctors, work resumed in earnest in all 27 public hospitals in Lagos State on 7  June, 2012.

“Since resumption of medical services in the hospitals, the Lagos State branch of the Nigerian Medical Association and the Medical Guild have written series of letters to the Lagos State Government requesting for meetings and mechanisms to be put in place to resolve all the outstanding issues that led to and emanated from the recent health sector crisis, including CONMESS.

“However till date, the government is yet to invite the NMA or the Medical Guild to any meeting to look into these issues. The only correspondence from government was to inform us about a committee it set up to review wage matters of health workers,” he said.

According to Odusote, “we however do not know the composition of this committee, neither have we received any correspondence from the committee.

“Rather than engender industrial harmony, the government has adopted measures to stifle our members by arbitrary deductions in April salary, withholding May salary, forcing only doctors to fill daily activity reports and victimisation of a Principal Medical Officer who had a verbal altercation with a locum doctor.

“We wish to call on all well meaning Lagosians and stakeholders who intervened to resolve the last crisis to prevail on the Lagos State Government to do the needful by initiating a process of resolving all the outstanding issues once and for all, while we on our part will do all that is necessary to preserve industrial peace in the health sector.”

The government had through a circular warned that it would enforce the ‘no work, no pay’ policy henceforth if doctors in public hospitals should again embark on indefinite strike, saying that the doctors’ actions in the past disrupted services in the health sector.

The government said there were growing concerns about the quality of service and dedication of staff in public hospitals, which had made it duty-bound on government to clarify that medical services were classified as essential under Nigerian law.

It stated that following disruption of the health system by doctors, the public was seriously concerned about the adverse effect on patients who were abandoned abruptly, regardless of their state of wellness and exposed to untold suffering and premature death.

A circular issued by the Acting Head of Service, Mrs. Josephine Williams said the government did not expect doctors and other health workers to embark on any strike without strict compliance with relevant provisions including providing of essential services.