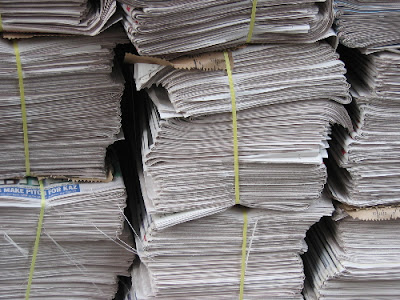 This bizarre episode took place few hours back in Hwolse in Jos.

N300,000 church offering suddenly turn to mere bundle of papers as it was about to be deposited in the bank.

The N.3m church offering money which belonged to St. Mary’s Parish, Hwolshe in Jos S LGA was handed to Miss Ifeoma Eze, the Church Secretary to be deposited in the bank before the mystery occurred.

According to NAN report, Ms Eze said she had filled the teller at the main branch of Jos Zenith  Bank with the money wrapped in polythene but saw papers when she was about to give the cash to the cashier.

“The money was intact when I left home for the bank but on getting to the counter, I opened the polythene bag only to discover that it has turned to bundles of papers.

“I was so confused and scared; I started screaming and was oblivious of the attention I was attracting as bewildered customers tried to console me,” she told NAN.

She said that she was particularly confused because she was wondering how to relay the story to the Parish Priest who entrusted the money to her.

She said that she was still “too baffled and confused” to convey her shock, adding that it was difficult to imagine what had happened.

“It is a story I find difficulty in telling anyone because not many people can believe it,” she said.

Eze said that she could not fathom what could have happened but explained that she took the money home on Sunday and changed the smaller denominations into bigger ones to ease the deposit processes in the bank.

She said that she did not suspect foul play from the point of changing the denominations and explained that the change was obtained from market women and cashiers of Mr. Biggs, a popular fast food outfit.

“I do not suspect them because they are my regular customers. Only God knows what could have happened.”

NAN learnt that the incident had sent tongues wagging among some skeptical members of the church.

Eze, however, expressed some relief that many of the members were convinced that there was no foul play on her part.

“I thank God that the Church believed what happened to me and the money and still retained me as the Church Secretary,” she said.

A church member, who spoke on condition of anonymity, said that it was not difficult to believe Eze’s story because she was the Church Secretary and had handled its funds without any blemish in the past five years.

“I have never heard of such a thing before but it has happened to us; to our church. There is nothing we can do about it. My secretary came back from the bank crying.

“Only God knows what exactly happened. Eze came and told us what happened to the money and we couldn’t say otherwise.

“We have left everything in the hands of God our creator,” Ray-Ikpe said.

The Priest, however, advised Eze to be “extra careful” when going to the bank to deposit cash.