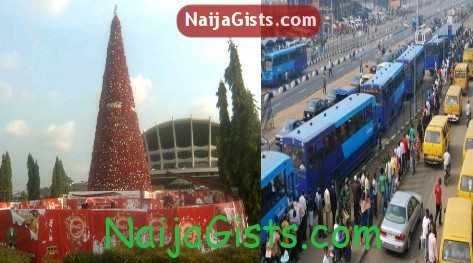 For ease of movement on Christmas and New Year days, the Lagos State Government has said it will provide free bus ride to Lagosians on December 25, 2012 and January 1, 2013.

The free bus ride, according to a statement signed by the Managing Director, Lagos Metropolitan Area Transport Authority, Dr. Dayo Mobereola, will enable Lagosians move around the city.

The free bus service, which began in 2008, had helped in reducing congestion and accidents on the roads during festive periods, the statement added.

The free bus services to be provided by the First BRT Cooperative on the Mile 12 to CMS Bus Rapid Transit system corridor and the Ikotun-Igando-Iyana-Ipaja-Maryland Bus Franchise Scheme corridor would run between 7am and 10pm.

Mobereola appealed to those who would put their vehicles on the road to drive with care and observe all traffic rules.

Mobereola reminded road users of the existence of the Lagos Traffic Law and warned against flouting the law under the guise of the public holiday.

While wishing all Lagosians merry Christmas and prosperous New Year, Mobereola called for moderation during the celebrations.