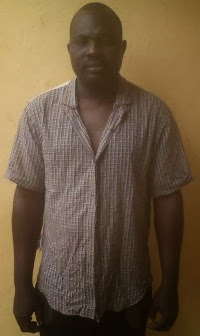 Mr Taiwo Bakare, a 42-year-old Landlord who allegedly defiled a 10-year-old girl has been arrested by Lagos Police officials.

The victim who is a daughter to Bakare’s tenant claims she was lured to his parlour with sweet on the 10th of November, 2013 before being raped at 45 Unity Road in Egan area of Lagos state Nigeria.

Bakare allegedly fingered the girl, after giving her sweet and as he was about to put his manhood in her private part, he was caught in the act.

According to Igando Police officials, Taiwo Bakare was arrested after a tenant who saw him raised an alarm that attracted other tenants.

Police detectives were invited and they arrested the man and took him to their station.

In his confession, Taiwo Bakare claims he is a married father of four children with high desire for sex.

“My wife and children had all gone out when the devil took the better part of me and I had to lure the girl to my parlour in an attempt to have sex with her,” he confessed.

A police officer at Igando station who confirmed the incident said Taiwo Bakare will soon be charged.