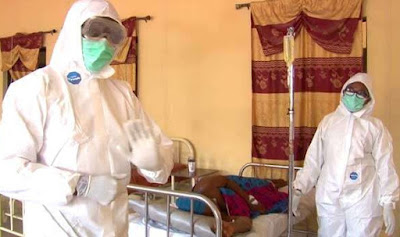 The two patients treated for the contagious fever, died within few days of admission.

In a statement, the Chief Medical Director (CMD) of LUTH, Prof. Chris Bode, said the two patients were presented very late and died in spite of efforts to save them.

“The first was a 39-year old pregnant lady with bleeding disorder who died after a stillbirth. Post-mortem examination had been conducted before her lassa fever status was eventually suspected and confirmed. No less than 100 different hospital workers exposed to this index case are currently being monitored.

“A resident doctor from the Department of Anatomic and Molecular Pathology who took part in the autopsy was later confirmed with the disease and is currently on admission and responding to treatment at the Isolation Ward of LUTH.”

Prof Bode visited the Isolation Centre of the hospital yesterday in company with his top management staff and spoke with the doctor and staff to boost their morale and assure them of the hospital’s full support.

He enjoined all LUTH workers to maintain a heightened level of alert “in the wake of this new outbreak and observe universal precautions in handling all suspected cases of this viral hemorrhagic fever.”

LUTH has always worked closely with officials of the Lagos State Ministry of Health in handling a number of diseases of public importance such as rabies, cholera, Lassa fever and the recent diarrhoea disease at the Queen’s College, Yaba.

The Lagos State Ministry of Health and the Federal Ministry of Health have responded swiftly to contain the recent outbreak of Lassa fever by mobilising human and material resources to trace the sources and extent of the disease, follow up on potential contacts, identify early and test suspected cases.

Bode noted that there are adequate materials for containment of the disease while drugs have been made available to treat anyone confirmed with the disease. The Centre for Disease Control (CDC) in Nigeria has also been contacted. Two other suspected cases from Lagos State are also presently admitted and quarantined, while undergoing confirmatory laboratory tests.

“Lassa fever is an acute febrile illness, with bleeding and death in severe cases, caused by the Lassa fever virus with an incubation period of 6-21 days. About 80 per cent of human infections are without symptoms; the remaining cases have severe multiple organ disease, where the virus affects several organs in the body, such as the liver, spleen and kidneys. Lassa fever is a significant cause of severe illness and death.