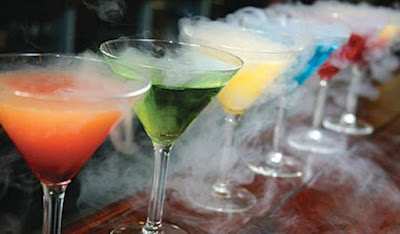 It is now a celebrated fad. The young and the old cannot do without it. The educated and the uneducated also relish it with reckless abandon. Even the female folks also savour its intoxicating high. Under the guise of power/energy drink Nigerians are consuming alcoholic beverages of various make and constitution with dizzying frenzy. Indeed party organizers now serve them as drinks of choice. And parties staged by the youngsters are deemed successful only based on the number of cans and bottles of energy/power alcoholic drinks consumed at such events.

And make no mistake about it; it is not just because of the surge of power promised by the promoters and makers of such drinks that is making the old and the young go for these happening drinks. It is also because the manufacturers and producers, and permit me to say, mixers and those who market them also claim that a shot of the drinks can make their drinkers go on and on under the sheet. To speak more plainly they claim that these products have aphrodisiac elements that can make the male folk do the impossible on the bed like lasting for more than six hours at a go. And some of the names of the drinks reveal the intention of their promoters ,Whip, Babeje( Spoil the Place) Horsepower, Wa fe ku laleyi, ( You will almost die tonight) Power, Muscle , Pasan , Bilala, Burantashi etc.

However what the drinks and their promoters promise is at variance with the position of medical science on matters of intimacy. Medical researches and practitioners hold that the average period for intimacy between man and woman is between 3 and 13 minutes. Anything after this is either make belief or mechanically induced act with little or no intimate value. But you can tell that to the birds when the airwaves and newspapers and television advertisement and jingles continue to extol the dexterity of the drinks and their ability to deliver the promise of enhancing the libido of the ever growing patrons.

The shocking fact is that most of the drinks are nothing but poison that can kill, maim or induce people to violence. Most of the so called energy and power drinks are lethal cocktails with some of them having alcohol content of more than 47 percent. This is pure ethanol which when consumed can damage delicate organs and tissues of the body. Most of the manufacturers pay little or no attention to prescribed health, safety and regulation standard governing the production of such products. To them the higher the alcoholic content, the better. And it is usually all about cash and nothing more. The health value is minimal and in most cases pure fiction. . Some of them prepare the cocktail in dingy shops and one room apartments. And since they are operating from some dingy locations and shops they pack the drinks with unhealthy products, herbs of doubtful origin, pure alcohol, which some have described as pure ethanol, and more.

The consequences of the unbridled consumption of the various lethal cocktails are now with us. After such consumptions many are driven into illegal and illicit sex including acts of rape and violence against women. Road accidents and other crimes could also be attributed to the uncontrolled consumption. Cases of collapse bladders, heart and kidneys are also on the rise putting further pressure on the troubled health sector. Recently a young man lost his life in Lagos after consuming several bottles of one of the lethal products packaged as alcoholic energy drinks. The guy’s body system simply collapsed from alcohol poisoning. He did not make it to the hospital.

We have a national emergency on our hands. Now is the time for the National Food, Drug Administration and Control, NAFDAC, the Federal Ministry of Heath and all states ministry of health and other concerned bodies to step in and control the situation. There should also be a lot of persuasion since old habits die hard. The National Orientation Agency should lead the campaign against the looming disaster. Churches and mosques and all men and women of goodwill should also join the campaign against the consumption of the lethal beverages being served as energy drinks and libidinal enhancers.

Nigerians, especially the young generation, should be discouraged from drinking themselves to death.

How Issakaba Producer Kasvid Was Crushed To Death While Returning From Burial – Colleague
Suspected Herdsmen Arriving Nigeria From Niger Republic Arrested In Abuja..Photos