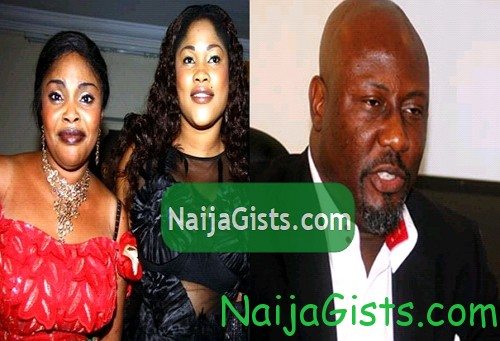 Yoruba actress Lola Alao, a close friend of actress Bisi Ibidapo has opened up on an allegation raised by Bisi Ibidapo that she is dating Dino Melaye. naijagists.com

Few weeks ago, Bisi accuses Dino Melaye, a popular Lagos-based politician of abandoning her after impregnating her.

Lola Alao who has kept mum over the issue until now revealed some shocking details to City People Magazine.

Here is what Lola Alao said in the interview:

Bisi should leave me out of her pregnancy mess. How can an adult like her not know who impregnated her? Is Bisi a small girl, that I Lola, will now carry and give Hon Dino to date? It is sad that she has dragged him into this mess. Is she the first actor or actress that Dino will help? Why is she making a deal out of meeting Dino?

Dino has been my friend for years and was even at my movie premiere several month back where he donated N10million. I wish to state categorically that I have never dated Dino, I am not dating him and can never date him because he’s like a brother from another mother. It is quite unfortunate that Bisi is scandalizing Dino this way.

Everything smacks of blackmail to me. Maybe she thinks since Dino donated N10million at my launch , she can scandalize him and make some money off him. I leave her to her conscience.