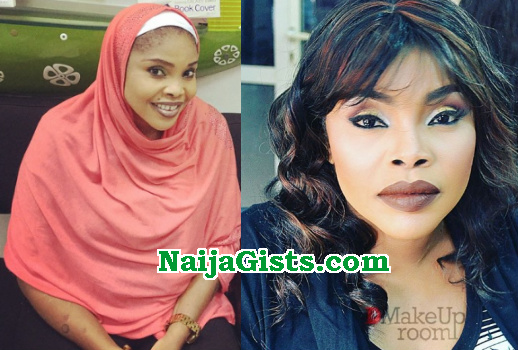 The actress who returned to Nigeria from the United States few months ago after her marriage crashed reportedly dumped Christianity for Islam last week.

Her conversion was announced by Adepoju Yusuf Olatunde of Acadip Nigeria on Tuesday.

The Islamic cleric told fans yesterday that the actress has found the fastest route to ‘paradise’ by shunning Christianity for Islam.

An insider alleged that Lola Alao’s marriage ended untimely after the ex-wife of the man took up spiritual battle against her, prevailed and retrieved her husband back.

The source said the actress has no option than to flee her new matrimonial home to Nigeria.

Few months after arriving Nigeria, she lost her aged dad.

This and many other spiritual battles forced the actress to go spiritual and seek the face of God to end her endless woes and in the process we learnt that she met a couple of friends in the industry who encouraged her to give Islam a try.

Continue Reading
You may also like...
Related Topics:lola alao is now a muslim, lola alao muslim name, why did lola alao converts to islam