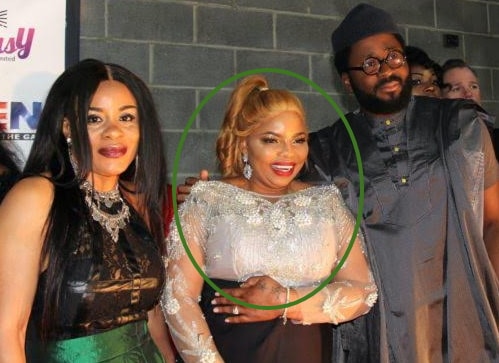 London based actress and film producer Timmy K talks about her debut Nollywood movie Just One Blood’ in an exclusive interview.

The Fantasy Communications Ltd founder also talks about the making of the movie, the actors and her role as a supporting actress.

The London premiere of Just One Blood took place on Friday, May 18th, 2018 at Odeon Cinema Greenwich. The premiere was star-studded with veterans Nollywood actor Zack Orji, Desmond Elliot, Teco Benson amongst other prominent faces.

Hello Timmy K, you just premiered your Nollywood debut in the UK, and your name has been hot in the media recently. Can you please introduce yourself?

My name is Timmy K MacNicol, Nollywood actress-producer and the CEO of Fantasy Communications. I’m also a wife and mother to one cute boy.

I got into the movie industry in late 2008 after training as an actor at the Universal Talent Multimedia Training Institute in Ghana, 2007. I also studied Film and TV acting at Pencils Film and Television Institute (PEFTI) in Lagos, Nigeria in 2008. I left the industry in between because of unforeseen circumstances. My first significant movie is ‘JENIFA’, produced by Funke Akindele. I’ve also done a lot of extra acting jobs in Nigeria and Ghana, and during acting school, I did a lot of up-paid acting work if you know what I mean.

Are you based in Nigeria or the UK?

Yes, I leave in the UK but often travel to Nigeria and Ghana for projects.

Can you list some of the projects you featured and some of the most fabulous people in the Film industry you enjoyed working with and why?

I featured in Jenifa the movie, produced by Funke Akindele, Who Owns Da City, Blast for Last tv series and many more I can’t remember because it been a while now. I enjoyed working with Funke Akindele. She is such a nice person to work alongside. Funke is very creative very ambitious and a woman who knows what she wants. She is a go-getter, I see a lot of her in me when it comes to creativity, she made our filming time together on the set of Jenifa fun, she is a very down to earth person.

Working alongside Eniola Badmus was fun, she brings out the fierce character in me.

Working with Iyabo Olo, also known as Boss Lady was epic, she added more energy to my character she is a fantastic and beautiful actor.

I’ve also enjoyed working with Chika Ike, Nadia Buari, Kofi Adjorlolo in Who Owns Da City film directed by Ifeanyichukwu Onyeabo, it will be a pleasure to work with them again hopefully.

You’re the CEO of Fantasy Communications Limited, what don’t we know about the company?

Fantasy Comms was initially a Nollywood celebrity magazine company in Lagos and Ghana, in late 2008 until 2011. After an in-depth consideration, we decided to turn it into a film production company. And here we are today; Fantasy Communications just gave birth to ‘Just One Blood’ movie.

And your movie ‘Just One Blood’ just recently premiered in the UK, How do you feel?

The feeling is fantastic, exciting, and the atmosphere was heavenly without end. The feedback from the viewers after seeing the film was terrific, I was thrilled after the successful premiere. But I wouldn’t lie, it was challenging for me to get everything going at first. With it being my first production, I give all thanks to God almighty my father for who helped me throughout the production.

We also understand ‘Just One Blood’ is the 1st Nollywood movie shot in Suffolk, a village in England, how did this come to be?

Well, I was inspired by the beautiful countryside in Suffolk where I live. It all starting one day, I was biking through the country-side, I saw people farming with tractors and many other machines, nostalgia immediately kicked in, back home we cultivate with knives and hoes and seeing farmers here was a good site. I couldn’t stop thinking about it; I knew I could make a story out of this situation. Right away, I started recording my ideas on my phone, so I don’t forget. But I was most worried about how I can execute the plan, I decided to get Nollywood to collaborate with Suffolk film industry, because here in Suffolk, people don’t know much about Nollywood, and this was an excellent opportunity. So as a member of (AGM) Actors Guild of Nigeria, one of the only ways I can contribute to the industry was what I just did, to let this part of the world to know more about Nollywood, and also know that there are good people in Nigeria, Africa as a whole. I began working day and night researching on how to get actors in Suffolk film industry, by God’s grace and with the help of Shirley Day, my mentor I was able to get support from Film Suffolk, as well as cast actors from Nollywood.

You wrote and produced ‘Just One Blood’, which featured famous Nollywood icons, Zack Orji and director Teco Benson, How did you make this happen?

Getting Nollywood icon, Zack Orji and Teco Benson on this project all the way from Nigeria wasn’t easy. I cast this actor and director because of the storyline, an African farmer in the united kingdom. Only an experience icon like Zack & Teco can interpret the script with a spicy of Nollywood culture. They are one of the top list of professionals in Nollywood; it was a great honour work with them.

You also worked with many other Nollywood & English actors like hunk Mofe Duncan, Chioma Toplis, Anita Hogan, Paul Andrew Goldsmith, Angeline Hunt and Tee Nzekwe to name a few, Why did you choose these actors?

Mofe Duncan is a fantastic actor, he was in the UK when we began shooting, Chioma Toplis live here, and she was very helpful from the beginning, in fact, she was the first person I cast for just one blood. Paul & Angeline are amazing English actors, and we need to see them more on screen. So with God on my side I choose both the casts and crew with so much confidence, they all did a brilliant job, in fact, we are all just one blood family now.

You played a supporting role in Just One Blood and executed your character so well, can you tell us why you played the character Ebere?

For me to be able to execute my role in Just One Blood, I had to do a lot of research on drug addicts which helped me understand my character very well. With it being my first role as a supporting actress, was fascinating. I choose this character Ebere because I wanted something challenging, something that will push me off to the edge.

So with me acting, producing and sorting out the costumes wasn’t a walk in the park.

Timmy K production, is this something we should look forward to in the future?

That is an excellent question, but I can’t give any answer now when the time comes, You will be the first to know.

We also learned that you’re a mum and wife, how do you juggle being an actress, producer and all at once?

Trust me is not an easy task, especially when your child is still little and demanding, my boy is my number one priority in everything I do, he comes first. My husband and I have to get a permanent childminder called Stephanie for our son Morgan because my husband work abroad he is not in the UK most at the time and I often manage everything alone. When working on my movie projects, sometimes I don’t go to bed until 2 am and also have to wake up at 6 am to get my son ready for school, before heading to work, while the childminder picks him up after school. I pick him up at 6 pm from the childminder, so yes the juggling is real, I call it ‘life in the U.K’.

When will ‘Just One Blood’ premiere in Nigeria the heart of Nollywood?

Most definitely yes the date will be out soon, we’re currently working on it. So Nigerian fans get ready; this is one movie you don’t want to miss.

I will also like to say a massive thanks to my beloved husband, Duncan MacNicol, Malcolm Macnicol my father in~law, my sister in~law Jill Bowring, my mentor Shirley day my scriptwriter and film Suffolk for believing in me and giving me all the support I needed.