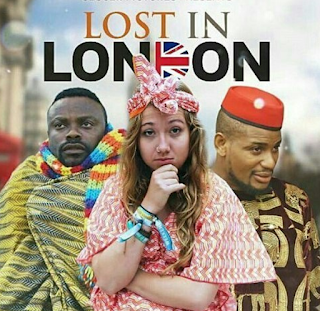 The comedy movie which features Bishop Umoh in his famous character Okon, opened to cinema lovers last Friday, June 9, 2017 and has been described as a movie that showcases a rich Nigerian cultural heritage.

Here is what the movie producer, Uduak Isong Oguamanam said about the success of the movie:

“I have been visiting different cinemas, together with the actors in the movie and we have all been impressed and at the same time thankful for the massive turnout.

“The tickets sold out everywhere we went and we hope this will continue for as long as possible. The smiling faces of the people as they came out of the hall showed that they obviously had a great time and were entertained. That reaction was the reward of all our hardwork and dedication.”

‘Lost in London’ is the third production in the Okon franchise and like its predecessors follows the hilarious adventure of Okon. It tells the story of Okon and Bona, who were selected for an exchange program in London.

They attempt to earn some precious Pounds before returning to Nigeria and experience culture shock and all sorts of trouble. But Okon and Bona are made of sterner stuff and every step of the way proves that the Nigerian spirit cannot be broken.