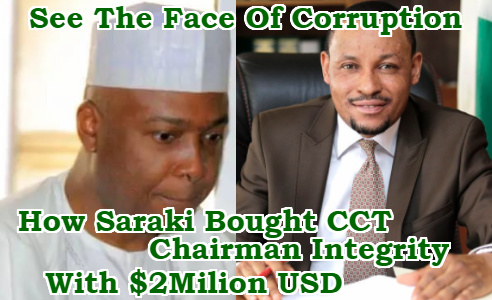 To set himself free from CCT probe, Senate President Bukola Saraki paid heavily in cash, and in kind, SaharaReporters learned on Wednesday.

The cash payment, a whopping $2million, went to CCT Chairman, Danladi Umar. The kind was a promise to the cabal at the Nigerian presidency to block Ibrahim Magu’s confirmation as chairman of the Economic and Financial Crimes Commission (EFCC).

A source close to the CCT revealed to SaharaReporters how Mr. Saraki and his lawyer, former Attorney General Kanu Agabi, had worked relentlessly since Saraki hired him, with the objective of stopping the trial one way or another.

Some of the calculations were easy: Mr. Agabi had formed a close relationship with Mr. Umar, whom he had hired out of Law School years ago to work in his private legal practice following his tenure as Attorney General of the Federation (AGF). Mr. Umar’s brother, Sambo Umar, also worked with Mr. Agabi during his tenure as AGF.

At a first meeting facilitated former Governor of Bauchi state, Isa Yuguda in Abuja, Mr. Saraki reportedly offered the CCT chairman the $2m to acquit him of the false declaration charges he faced.

But Mr. Saraki did not speak the words, our source said. Instead, he showed the figure to Mr. Umar typed on his phone, fearing that if he said the figure out loud he could be recorded.

Mr. Saraki, who is a very wealthy man, can conveniently afford such a sum, partly to wholesale rampaging over public funds in which he has been involved, and which is at the heart of his trial. But he may also have been strengthened by his recent embezzlement of over N3.5b in Paris Club refunds.

The entire deal, according to the source, was facilitated by former Bauchi State Governor Isa Yuguda, a friend of Mr. Umar, but it also involved a top police officer.

To sweeten the deal, the Senate president also offered to block the confirmation of EFCC Chairman Ibrahim Magu. It would be recalled that in a severe blow to the anti-corruption war, the Senate in March 2017 denied Mr. Magu’s confirmation.

Mr. Umar agreed to help Mr. Saraki. He had succeeded in postponing the hearing several times for over a year before suddenly calling Mr. Saraki’s lawyers and prosecutors yesterday to tell them he would rule on the case.

SaharaReporters learned on Tuesday night that the decision would acquit Mr. Saraki of all wrongdoing, and a source revealed that Mr. Saraki boasted to his colleagues that the matter had been “settled.”

Mr. Saraki was then officially acquitted of all charges on Wednesday.

Ahead of the ruling being made, his Chief of Staff and his social media handler, Bankole Omishore, then confidently went as far as to invite 10 youths to have a celebratory dinner with Mr. Saraki today.

That event is held tonight with several of the youths abandoned to their fate after they ate at Saraki’s residence.