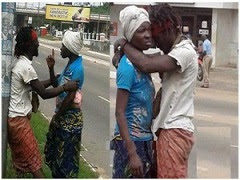 While the Accra Psychiatric Hospital is threatening to discharge its inmates due to lack of resources, two mentally-challenged lovebirds are causing a stir in Accra by often kissing, caressing and playing romance in public making them the most talked-about couple in town.

Sometimes the two are seen having their share of the usual misunderstanding between lovers where the woman goes nagging and the man tries to calm her down.

The two are often seen at the Accra High Street (now known as the Atta Mills High Street), Independence Avenue and the Ring Road Central area.

Over the weekend, NEWS-ONE cameras caught the two while they openly kissed and caressed themselves right in front of the SG-SSB Bank at the Nima Junction Traffic Light near the Nima Police Station.

Though the two lovers did not get to the extent of bonking, they kissed, caressed and fondled themselves intermittently in the open for close to half an hour. Just before they started unleashing their libido, the female was seen complaining angrily about something while the man was calming her down.

Each time the female complained and threw her hands in the air, to register her anger, the male counterpart would signal her to calm down and let matters die off.

At a point in time, she took off her clothes covering the upper part of her body but her lover convinced her to put it on after which they embraced each other and started their love adventure.

They then continued their stroll on the isle of the Ring Road towards the King Tackie Tawiah Overpass but mid-way, they turned back and walked towards the Kwame Nkrumah Circle as onlookers enjoyed every bit of the spectacle.

Not too long ago, the couple were seen on the Accra High Street in a near distress as the man went from vehicle to vehicle begging for GH¢1 to buy food for the female.

While the male was begging for the money, the female was following him and complaining that she wanted to eat gari and beans. When a Good Samaritan finally gave the male an amount of GH¢1, the female immediately started clapping and jumping in jubilation and hugged the male. They then walked hand-in-hand to a food vendor nearby to buy some food.

Awwww, so romantic. Wish the are not mentally ill.