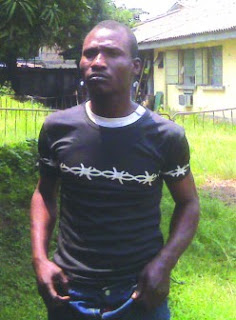 A 27-year old driver has been arrested and charged  before Apapa Magistrate’s court in Lagos for allegedly having sex with his girlfriend, a 23-year old Lagos State Polytechnic student, Thelma Lawrence, and posting her nude photo on the internet.

Aiyenero  who works at Ifelodun Local Council Development Area, LCDA, as driver was said to have humiliated his girlfriend that way because she allegedly denied him sex for a long period.

Delta State-born Aiyenero allegedly lured the victim to his house at 9, Ogungbe Street, Ajegunle where he allegedly  threatened her with a knife and forced her to strip herself.

Thereafter, he  used his mobile phone to take her nude photos and also recorded it on video and threatened to post it on the internet if she refused to have sex with him.

The victim allowed him have his way but he went ahead and posted it on the internet and gave the video to his neigbours to watch.

He was charged before Apapa Magistrate’s court on a five-count charge bordering on criminal intent  under the criminal code.

According to the police, the defendant deliberately and  unlawfully, with criminal intent, intimidated, annoyed and violently threatened the victim with a knife and had sex with her and thereafter, he displayed her nude photo on the internet.

According to the victim, she knew Aiyenero in Ajegunle where a street is named after his.

She admitted that they are friends and not lovers and whenever they met, they  usually greeted and discussed but not to the extent of having sex.

She said whenever he talked about sex, she  usually turned it down.

On what took her to his house, she said he collected her memory card and when she needed it, he asked her to come to his house to collect it.

She said she did not suspect any foul play and when she went to collect it and entered his room, he immediately locked the door, brought out a knife and threatened to kill her if she did not coperate with him.

“He ordered me to pull off all my clothes while still holding the knife and I obeyed him and he brought out his phone and started video-taping  me while I was nude and  threatened that if I refused to have  sex with him, he would post it on the internet,” she narrated.

She said he had sex with her and still went ahead to post it on the internet and sent it to their neighbours who watched it and told her.

On why he did it even after sleeping with her, she said Aiyenero said she refused to sleep with him after pleading with her for a long time.

On his part, Aiyenero said she was his friend and she has been coming to his house and later they separated.

He admitted that he recorded and took her nude photographs but he was not the person that posted it on the internet.

When he was arraigned in court, he pleaded not guilty.

The presiding Magistrate, Mr P. E. Komonanya granted him bail in the sum of N20,000 with one surety in like sum.

The matter was adjourned till 4 September, 2013.

He was remanded in prison custody pending when he will meet his bail conditions.