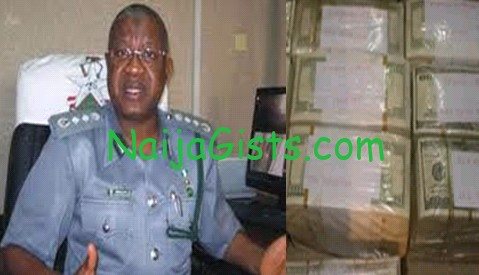 The passenger identified as Onwuekwe  Anthony Chidi, was checking in on Qatar Airways, when he declared the money, but could not explain the source of the currency as well as show adequate proof of his business to officials of Customs at the airport.

The passenger and the money have been handed over to officials of Economic and Financial Crimes Commission, EFCC, for further investigations.

According to a statement signed by the Customs Area Controller, Mr. Eporwei Charles,    “About  13.00 hours on November 19, 2012, a  passenger by name Onwuekwe Anthony Chidi, with passport number A04086671 was checking in on Qatar Airways, he declared the sum of $320,000  on both forms CDFIA and CDFIB but could not explain the source of the currency nor show adequate proof of his business to the Customs officer.”

Meanwhile the money and suspect have been handed over to the EFCC for further investigations. (Source: Vanguard)