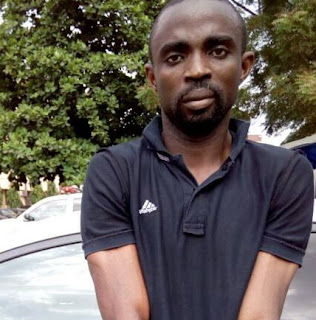 November 14, 2016 – Picture: Nigerian Man Collecting Money From Ladies With Threat To Upload Their Naked Pictures On Facebook Arrested In Lagos

Michael Atanda has been making money from four of his girlfriends in Lagos for a while now before he was caught.

The 35-year-old suspect has been extorting money from his victims with the threat to upload their naked photos on the social media before he was arrested by the officials of Lagos State Police Command after 5 days of surveillance.

In a press statement, police revealed that the suspect and father of 3 had collected N121,000 from 4 of his girlfriends.

The suspect using the name of Segun Bayo on Facebook said he graduated from OAU Ile Ife.

When life became tough, he took to Facebook to create a fake account using the photo of a London-based Nigerian. He reportedly added several ladies as friends and after 2 weeks of chatting with them, he lured them into sexual conversation during which he persuaded them to send their nude photos to him.

His case has been transferred to SCID Panti Yaba for investigation.