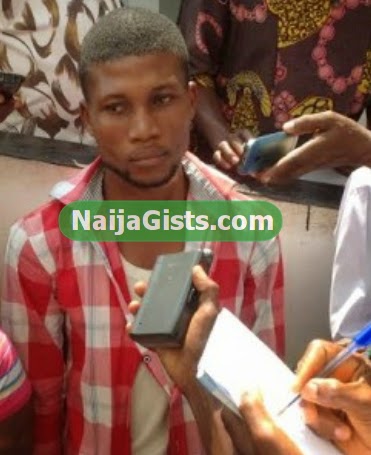 May 9, 2014 – Man From Cotonou Jailed In Nigeria For Planning To Sell His Son For N8M

A Chief Magistrate’s court in Akure on Thursday sentenced Kareem Saibu, 39, a citizen of the Republic of Benin, to three years in prison for attempting to sell his 13-year-old son for N8m.

Sentenced along with him were Abdullateef Mumuni and Kadir Rasaq, who are also from the Republic of Benin. They would be spending three years each behind the bars for their involvement in the crime.

The Chief Magistrate, Mr. Adebanji Ayeomoni, sentenced each of them without an option of fine.

He said, “Having found the three accused persons guilty of the two counts of conspiracy and attempt to sell a human being, the three are hereby sentenced to three years imprisonment each without an option of fine.”

The three accused persons of no fixed addresses were earlier arraigned on two counts of conspiracy and attempting to sell a human being and had pleaded guilty to the offences.

The prosecutor, ASP Zakari Ibrahim, had told the court that Saifat conspired with the other two accused persons to sell the minor for N8m.

Ibrahim said Saibu brought his son from Cotonou, Benin Republic, to Nigeria to meet with the other accused persons, who live in Ibadan, to help him find buyers.

According to him, luck ran out on the accused when they contacted someone in Ondo town who in turn informed the police about their intention.

“Their contact in Ondo pretended to be interested in the deal and he kept negotiating with them until the arrival of the police,” Ibrahim said.

The prosecutor said the accused persons committed the offence on May 3, 2014 at about 6pm in Ondo.

According to him, the offence contravenes the provisions of sections 516 of the Criminal Code cap 37 vol.1 laws of Ondo State of Nigeria, 2006 and contrary to section 30 (1) and punishable under section 30 (3) 0f the 0ndo State Child Right Laws,2007.