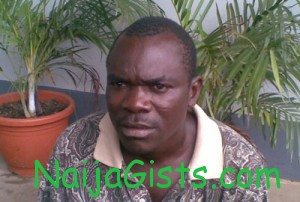 Emmanuel Ubom, a 42-yr old trader in Lagos state Nigeria has been arrested and charged for allegedly impregnating his 15-year old daughter, Uduaka Emmanuel 5 years after the death of his wife. naijagists.com

Mr Emmanuel claims he committed the immoral acts with his own daughter because she resembles his wife.

We learnt he got his daughter pregnant and forced her to abort it.

The man got busted after he was caught in the immoral act with his own daughter by a co-tenant in a face-me-face-you house located at Etegbin in Ojo, Lagos.

After several painful sexual demands from her father, troubled Uduaka Emmanuel confided in a neighbour who has been playing a motherly role in her life since the death of her mother.

After monitoring his movement for a while, the neighbour caught Emmanuel Ubom as he tries to have another sexual encounter with his daughter.

The perplexed woman quickly raised an alarm to other neighbours who dragged the sex-craze father to Ojo Police station.

Emmanuel Ubom was immediately charged to court on a one-count charge of unlawful defilement of his daughter, a crime punishable under Section 137 of the Criminal Laws of Lagos State of Nigeria, 2001.

In the course of his trial, the visibly remorseful man who pleaded guilty to the charge preferred against him, begged the court to tamper justice with mercy for the sake of his daughters.“I can’t deny the fact that I used to sleep with my daughter.

I don’t know what came over me; it is the devil’s work. Since I lost my wife five years ago, I have been so lonely and sexually starved, I don’t know how it all started, but my first daughter looks more like her mother; she possesses the physique and charming looks of her mother. I am so ashamed of myself; I just pray my daughters would forgive me, likewise the spirit of their dead mother,” Ubom pleaded before the court.

The police prosecutor, Assistant Superintendent Friday Ezeh, condemned the heinous act of the accused and urged the court to award the accused the appropriate punishment so as to serve as deterrent to other wayward fathers and guardians who are sexually molesting their daughters and wards under their care.

“This act is becoming more rampant in our present day society, and if severe punishment is not handed to offenders to serve as scapegoat to others, the message wouldn’t be driven home properly. Where I come from, this barbaric act of father forcefully having carnal knowledge of the daughter could lead to ex-communication or even ostracizing of the man if found guilty. Ubom shouldn’t be pitied,” he argued.

Wonders shall never cease in the our country o.