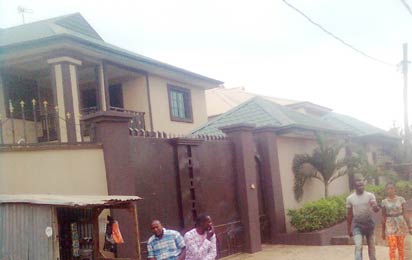 A 43-year-old man has been arrested for allegedly selling another man’s house valued at N7m in Shasha area of Lagos State, western Nigeria.

The suspect, Rotimi Alaka Lateef, allegedly conspired with six other persons now at large and sold a building belonging to Abiodun Fabiyi.

The property is located at 21, Bamake street, Shasha, Lagos.
According to police, Lateef had already received N700,000 advance purportedly from an undisclosed buyer before nemesis caught up with him.

Lateef and other suspects allegedly perfected the act by forging land documents such as purchase receipt, survey plan and stamp.
They also forged and signed an official family receipt of Akinlowo Olaife who sold the land to Fabiyi.

However, luck ran out on them after Fabiyi was tipped about the illegal transaction and he went and reported the matter to the police at Shasha division.
Lateef was arrested while his accomplices reportedly escaped.

During police investigation, the police discovered that the documents concerning the land were forged and the owner of the property, Fabiyi did not consent to the sale of the building.
Rotimi was charged before Magistrates’ court with conspiracy, stealing and forgery under the Criminal Code.

He pleaded not guilty.
The presiding Magistrate, Mr A.A. Fashola granted him bail in the sum of N100,000 with two sureties in like sum.

He was remanded in prison custody pending when he will perfect his bail.
The matter had been adjourned till 2 November 2015.