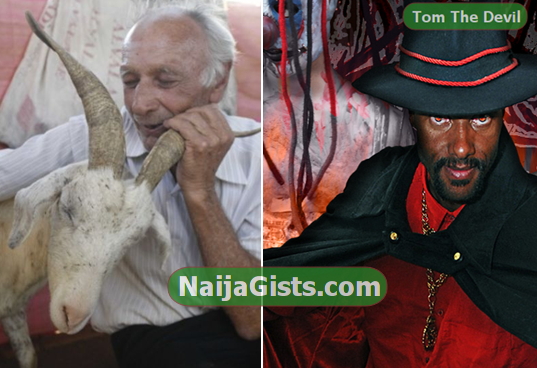 Sept 10, 2013 – Man To Marry His Pet Goat In Church Of Satan, Devil’s Church In Brazil After Christian Pastors Rejected His Idea

In a bizarre twist to love story, a 74-year-old retired man from Jundiai in Brazil who recently developed an intimate feeling for his pet goat will be getting married to the animal on October 13th, 2013.

Aparecido Castaldo, a retired stone cutter reportedly fell in love with his goat 2 years ago.

The goat named Carmelita has been accepted as a step-mum by Aparecido’s 7 grown children who lost their biological mother few years back.

Due to the controversial nature of the wedding, animal rights activists are vowing to disrupt the wedding but to appease them, the goat husband-to-be said he has no plan to have intimacy with the goat. 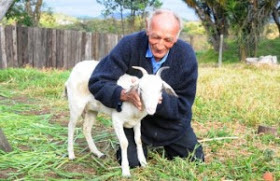 He just needs a life companion and Carmelita is just perfect. “Whenever someone says I am doing something wrong I reply the goat does not speak, ask for money to go shopping and doesn’t get pregnant – and she can’t talk,” the groom-to-be praised his future wife. She does have one fault, though – she tries to eat everything, including the first wedding dress Aparecido got for her. Luckily, he was able to find another“.

On the 13th of October, Aparecido Castaldo plans to hold a wedding reception party with no goat meat on the menu.

Because Christian ministers found the idea disturbing, no church in Brazil could accept his proposal.

The rejection led him to a popular Satanic leader, Toninho do Diabo popularly called Tom the Devil. He is the founder of Devil’s church in Sao Paolo, Brazil.

”Only our church accepted this love between man and animal because we have no prejudice,” Toninho said.

Which type of satanic idea is this? Man to marry a goat.