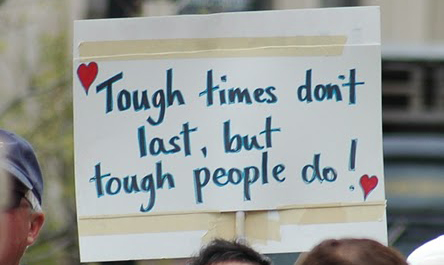 Sept 10, 2013 – Self Encouragement Tips For Troubled Times: Picking Up the Pieces Again

…..Getting through tough times

If anyone is dreaming of a lifetime devoid of challenges and issues, then this realm may not be the right sphere of existence for that individual. Cheesy as it may sound, but life has a specialty in dealing sucker punches.

Sometimes those blows meet us in the wrongest of positions and timing, making us stumble, fumble, wane and sometimes fall flat on our face. No matter how hard we may be hit, how great our loss may be or how much pain we may have gone through, we will have to pick up the pieces again and continue in the race.

Has the man you loved with all your heart and life jilted you? Has the company you used two decades of your life to serve selflessly fired you without severance pay? Has the business you used your life saving to start crumbled before your very eyes just in the face of retirement? Have you been rusticated from a university program for an offence you never committed?

Pick up the pieces again. Pick it up for this is not the end of the road.
When the Wright brothers began to get curious about building a machine that would fly both humans and goods, they didn’t look any different from jokers. They were not educated, neither did they look rich enough to fund the enormous amount of research the work would require, nor were they counted among the brightest of America’s Scientists; they weren’t even scientists either.

Even the most informed of scientific minds have tried to build one and have failed over and again; as such when they announced that they would give the world a plane, they laughed them to scorn, it just wasn’t possible. Eventually they started out, facing untold difficulties, challenges and financial constrains. And on that beautiful day in November 1903 after a protracted struggle, their labor finally paid off and they flew the first engine-propelled, pilot controlled flight.

But something horrible occurred afterwards: they had satisfactorily tested the ability of their machine to fly and then landed safely, waiting a little before they would unveil it and show the world the wonders of the machine they have invented. In the place where that airplane was landed, a gush of wind hit it, almost turning it over and causing great damage. Ah! No! What a misfortune! Not at this time! But it was the wrongest time to give up and somehow, the Wright brother found the courage to start picking up the pieces and putting it together again.

Far easier it is to switch to denial mode and live in self-defeat for the rest of our days, after life’s sucker punch has taken its toll.
After the of news Tiger Woods’ infidelity broke out, the world media had a field day making sure that every dick and harry on the surface of the earth saw the complete failure Woods had become. Woods who was a brand ambassador for many Fortune 500 firms saw himself standing almost alone out in a cold harsh world, for investigative journalists visited his case with such full force digging into his covered files of infidelity and fed the world with both facts and fiction.

Woods was really messed up, it would have been far easier for him to slide into depression and be permanently kept there until he can hardly distinguish between reality and illusion and wait for the day he would die a wretched alcoholic, but instead, he confronted his realities, owned up to his transgression, apologized to his wife, started over again and today the rest is history.

It is even easier to give up on the cheapest of goals than hold on to our dreams in the face of great adversity or even dare to get up again after we have been swept clean off our feet by circumstances or situations in which we find ourselves.

It pays to pick up the pieces again, no matter in how many places your dream may be shattered, just pick them up again and little by little it will fall in place and like the tortoise shell, again you will end it much stronger and far better than you started out.

About the author: Igbokwe J. Ifeanyichukwu is the CEO of Jubilee Concept Consulting, a corporate life-enrichment and management consulting firm with focus on peak performance diversity, innovative leadership and strategies. He is a seasoned writer, motivational speaker, strategist, Entrepreneur and an action coach.
Mail: ifeanyi.igbokwe@gmail.com