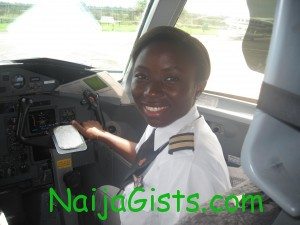 At age 23, Imoleayo Adebule is one of Nigeria’s youngest female pilots. Intelligent, daring, and confident are three words that best describe the tenacity with which she passed through one of the most complex schools in the world – Flying School, to obtain her license as a Commercial Pilot. Imoleayo has excelled in a profession that is not only averse to people of her gender, but quite difficult even to people of the opposite sex. Having graduated at the top of her class at the Nigerian College of Aviation Technology, Kaduna, she now works with Aero Contractors where she is making giant strides. She shares her inspiring story with Adeola Adeyemo in this exclusive interview. naijagists.com

How Imoleayo Adebule Started Off

Imoleayo has always been a brilliant girl. Born on 25th September, 1988 in Kaduna, she sailed through Primary and Secondary Schools faster than most of her peers. At 15, she was already through with her Secondary education at Royal College, Kaduna. Then came her search for an admission into the University where she wanted to study Mechanical Engineering. This was a very frustrating period for her as it lasted three years. “I finished in 2003 and I couldn’t get admission into the University,” she recalled. “I wanted to go to Ahmadu Bello University, Zaria, but between 2003 and 2006, I didn’t get admission.”

It was during her search for admission that she heard about an Engineering course being offered at the Nigerian College of Aviation Technology, Kaduna. “A family friend that works in Nigerian College of Aviation Technology, Kaduna, came over and told me about an Engineering course going on in the school, so I decided to apply for it. The name of the course is Air Frame and Power Plant,” she said.

To Imoleayo, becoming a pilot was “fate”. When she got to the College, she was disappointed to find out that they were no longer admitting students for the course. She was faced with the option of waiting for one more year or applying for the other available course which was Standard Piloting. Reluctantly, and with urging from her Mum and some Instructors at the College, she applied for the course. 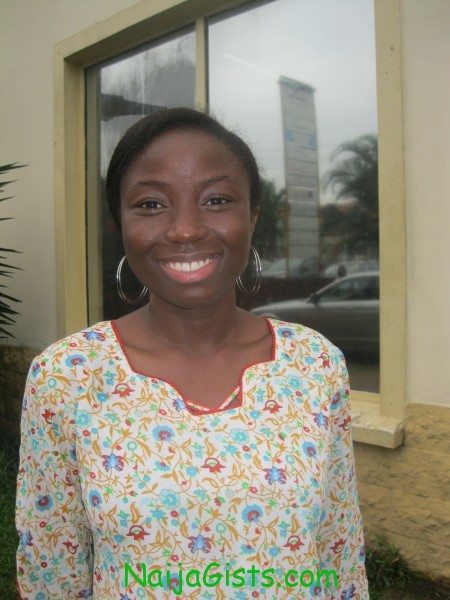 Getting admitted for the course was no mean feat, she recalls. “140 people did the interview that year. Only nine made it to the class and one person joined later on, so we were just 10 in the class. A lot of people might go in for it but it is not meant for everybody. There is a particular level a pilot’s IQ has to be at. If you can’t meet that level, then you can’t become a pilot. It was a two weeks interview. The first week, they gave us brief lectures on how everything works around the plane. The next week, we went in for the test. We used a Simulator in the school, which is the model of an aircraft, but on ground. You really won’t fly but basically what you see in an airplane is in it. And the view and everything is just the same. We had a class of about an hour and they just told us all that is in it to give us an introduction. I have a younger brother and we love to play video games together. When I went in, I just thought it was a video game. They ended up dropping a lot of people. If you want to crash, you hear a warning sound. A lot of people crashed that day. Then we did a complex coordination test. They wanted to know how we could handle multiple tasks at once. I did my best and at the end, my instructors were surprised. They were asking me if I’ve ever flown before. One of them said, “oh, you did everything like you’ve flown before. Then I asked myself what did I do that was so special?”

After crossing the hurdle of getting admitted for the course, Imoleayo was faced with another challenge, raising money to pay for the course. At that time, it cost a whooping N7,250,000 to attend the Flying School and till date, she is still awed at the way God provided the funds for her. “I was lucky and it was just fate for me to become a pilot,” she said. “During that time, my mum was going through a very challenging time in her business. I finally got an admission but I couldn’t raise the money to get myself into school. We did the interview in November and were to begin school in April, so I had about five months to raise the money. I wrote hundreds of letters to various airlines, various companies. The letters were flying everywhere, I was just writing to any place that comes to my mind. I wrote to my state government (Ogun) and they told my dad that the money was too much and the government couldn’t raise that money, that they could use that money to train about 10 doctors instead of training one pilot. I was so sad. Then I tried with Kaduna state government because I was born and brought up there. A woman there, then the personal assistant to the state governor’s wife told me that if I had claimed Kaduna state right from birth, she would have been able to get it for me in one day. Luckily for me, one of my instructors at the College gave me the names of three airlines that I should write to- Pan African Airlines, Aero Contractors and Bristow Helicopters. I wrote to the three of them and fortunately, it was Aero that called back. I went in for an oral interview. They sponsored three girls in the class. Amazingly, we got our fees paid the day our admission was to be nullified if we didn’t get our fees paid. If we didn’t get our fees paid on the 24th of April, we wouldn’t have been able to get in to the class but amazingly, the fees were paid on the 24th of April.” 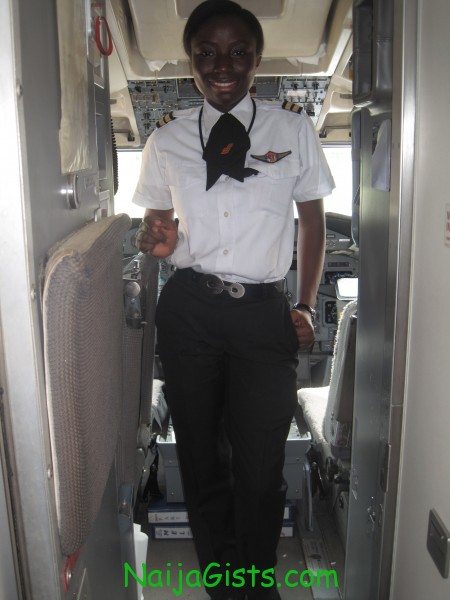 Eventually, Aero Contractors’ investment in her paid off as she was the best graduating student in her class. She was the second person to fly solo in her class, which means, flying the plane without an instructor. “When the instructor thinks you are fit enough to fly an airplane on your own, he would release you to take the airplane up and bring it back. In this case, an instructor needs to have enough confidence in you because you are actually flying on his license. If anything happens, he will be held responsible not you. I flew 10km away from the airfield and came back safely.”

This was a far cry from her first flying experience with an instructor in 2008 in which she felt so nervous, she said she would never fly again. “I felt so nervous during my first time in an airplane, and a small one for that matter. We were up in the clouds and it was a little bumpy bumpy. I was thinking in my mind, Lord just put me down and I won’t come back again. The instructor gave me the controls, and said hold it this way, you remember what you did in the interview, and I held it. Then he said, do you want to turn left, and I turned left. Later on he said I should leave the control that the airplane would keep flying. I looked at him thinking he must be crazy, I was not going to leave the controls and my grip tightened on it. Then he said Ayo, leave the controls. I was reluctant, but I gave the controls back to him. Then he said, Ayo I am going to release it and we are not going to fall from the sky. Immediately he left it, I jumped at it, and he was laughing at me. But I left it and he said now you see, we will not fall from the sky, the airplane is built to fly, it will not fall like a stone.”

Since then, Imoleayo has flown hundreds of times to various parts of the country and beyond its shores. She holds a Commercial Pilot’s License and was recently promoted to the rank of First Officer. She has been well exposed as she goes to different parts of the world every six months for training and occasionally, when she wants to learn the grips of a new aircraft. For her, the job of a Pilot is very lucrative, “I don’t earn an armed robber’s salary,” she is quick to add. “But I don’t think I could ask for more. I basically have everything I could ask for and I am very grateful to God. Even though I wanted to become an Engineer, I don’t think I would have been happier than I am right now. With God, nothing is impossible.” 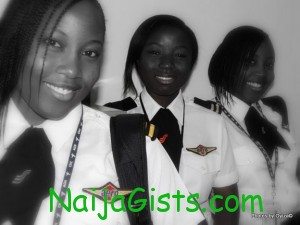 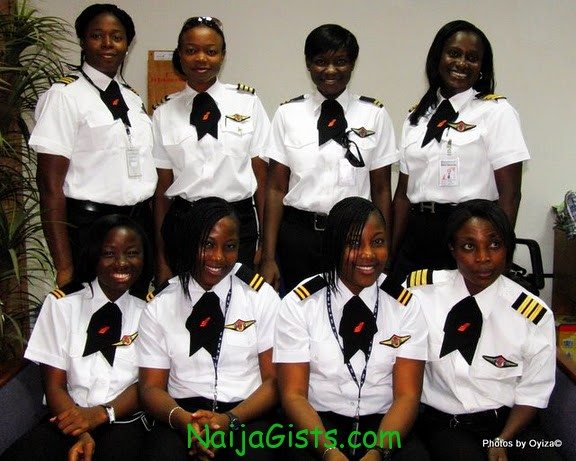 On her time spent at Flying School, Imoleayo says it was “interesting and challenging at the same time”. Even though the basic academic requirement to gain admission into the Flying School is similar to most Higher Institutions – 5 credits in Science subjects at O’levels, Imoleayo says that the level of competition there is more than the norm. “It was so competitive. 75% is the pass mark to a course; else you have to take it again. But that 75% was just like scratching the surface. Everyone was aiming for 90%.”

While comparing this to what she might have gotten if she attended another institution, probably a University, she says this level of competition might have affected her social life in a way. “To some extent, I miss that life. If I’m seated with my friends, the way they socialize is quite different from the way I socialize. Sometimes I feel like I’m in a different world. But I try so hard to mix up with people of different professions.”

However, she has no regrets. For someone who learnt how to fly a plane before learning how to drive a car, Imoleayo is “100% sure that it is still the safest way to travel.” She loves flying and can’t think of anything else she would rather do than flying. A key ingredient to succeed, she says, is doing what you are good at. “Know your strengths. I am poor with writing, I wouldn’t deal with English but I love Mathematics.” Secondly, aiming for the best. “Anything I find myself doing, I put in my best. It is a man’s world but we are women and we are doing it. It’s not like it is impossible. If you have the determination, there is nothing you can’t do.”