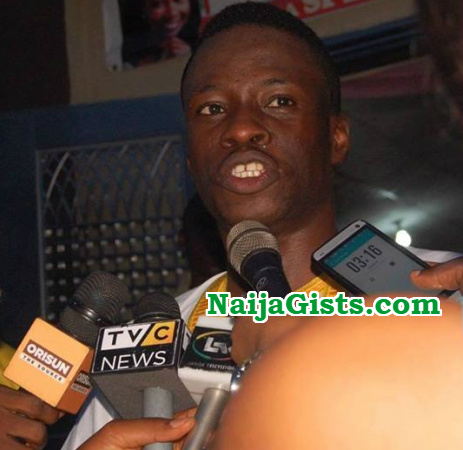 Meet Dr Oreofe Williams, a lecturer at Olabisi Onabanjo University who let go of his lecturing job for the calling of God.

He is the founder of a faith based film-making company, Oreofe Films and Theatre Productions.

The producer who is among those giving faith-based movies a face-lift in Nigeria recently talked with Seyi Sokoya. He revealed why he quit his secular job for film production.

How has it been ‘dumping’ lecturing for movie-making?

I have never regretted my decision leaving a lecturing job. At present, there are some lecturers in that university asking me to come back. I fact, some people commended my decision. I left because God led me to do so, especially to make impact in peoples’ lives and I didn’t regret leaving academics. I thank God that I was able to leave a good mark behind; we revived a lot of things in the department. I trained many students through our film production.

I trained my fellow students who have become popular in the industry today even as an undergraduate in the university. People like Ronke Odusanya, popularly known as Flaky Ididowo, Baba Tee, Oba Adeoye, among others, were all members of the Oreofe Theatre Group. There is no lecturer that is in Olabisi Onabanjo University (OOU) for money; they are seriously working, but not being appreciated. My last interview with a national daily became the source of my problem.

The Vice Chancellor did not take time to find out whether what he was told was true. I was accused of saying that I didn’t have time going to classes that I placed my film production above my lecturing job. I learnt the case was taken to the university senate and no one asked for my view till I took my decision. In fact, I didn’t tell my mentor, Dr Adebanjo that I was leaving because I left he might felt bad and could stop me.

So, what happened after?

Nothing. I wasn’t sacked. I just had a direction to leave on a faithful day. Aside that, I was already loosing my divine call because I was being advised to reduce my films. I am proud to be one of the intellectual assets of OOU. I am of the opinion that if you know yourself, then blow your trumpet, else they will turn it to a whistle.

To my surprise, no one was on my side; I wanted to write a letter to the VC, but I was discouraged. That means I shouldn’t grant an interview any longer. I was discouraged despite the low salary. If you see OOU lecturers just salute them because they are really working.

No one showed concern to what I was facing during the period. But I thank God I left because I have moved on with my life and I have recorded a tremendous progress with my initiative. I will be glad to give the VC, who will be resigning soon a warm embrace when we meet anywhere because the development indirectly pushed me to my breakthrough.

However, I got offers from other universities immediately I left OOU. On the other hand, the VC is a good man, because he has been able to transform the school.

Do you see yourself going back into academics?

I think I now have a stress-free life being the Chief Executive Officer (CEO) of Oreofe films, especially not having to report to anyone. The only thing I can do now is to consult for institutions, which I am currently doing, especially for some private institutions. The most painful aspect of my exit from OOU were the students I left there; they are promising youths.

So far, how has it been with your ministry?

I thank God that we are not where we were yesterday. The film village might still be looking bushy, but we call it a city by faith. We have been able to achieve a lot in the last few years and the ministry is gradually forming shape. Though it has been challenging, we have remained focused. You know that it is very rare for someone to leave a job that is bringing a monthly income, but I decided to take a courageous step. Film production is my first love and I have been into it for seven years before I ventured into lecturing. The fact remains that it is not realistic to pursue two missions to the top. For me, I just think I should pursue my movie career to the top and be a consultant to universities, which is currently becoming a reality. In fact, I am busier at present.

How many works do you have to your credit?

I have produced more than 20 films since 2006, especially with controversial titles. Being an actor and a producer has been an awesome experience for me.