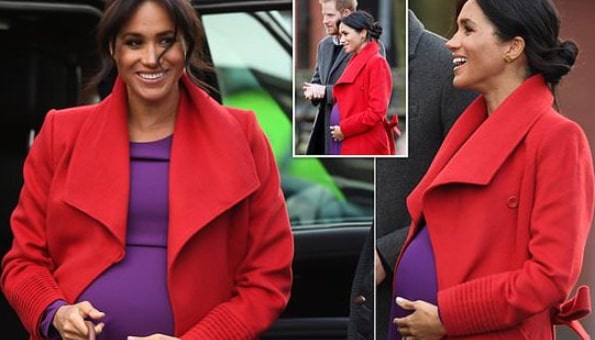 The Duchess of Sussex let slip her baby’s due date as she chatted to well-wishers today in Birkenhead England.

37-year-old Meghan revealed that she is six months pregnant, with her first child expected in late April as she met locals in the Merseyside town during her and Prince Harry’s first joint engagement of the year. She also revealed the couples don’t know whether they’re having a boy or a girl, as they want it to be a ‘surprise’, according to Cosmopolitan.com.

Meghan Markle and Prince Harry went on a super long royal walkabout as part of their first official engagement of 2019, and The Duchess spent quite a while chatting to the crowd.

And um, apparently she told everyone her due date—not to mention how far along she is! According to several royal reporters who were at the event, Meghan told a lucky woman in the crowd that she is six months pregnant and expected to give birth this coming April.

This is as close as we’ve gotten to a confirmation of Meghan’s due date, as Kensington Palace had previously said that she was simply due in spring 2019.

Meghan is reportedly considering Frimley Park hospital in Surrey for her delivery, which would be a huge departure from St. Mary’s Hospital in London, where Kate Middleton and Princess Diana delivered their children.

There are also reports that Meghan is considering a home birth, which would be an even more huge departure from tradition.

The couple tied the knot on May 19, 2018, after a smitten Harry popped the question in London in 2017. The wedding took place at St George’s Chapel at Windsor Castle and was attended by A-list stars and watched around the world. Prince Harry and Meghan first met after being introduced by mutual pals but only announced they were together in November 2016. (NAN)

Continue Reading
You may also like...
Related Topics:april 2019, baby, date, due, meghan markle