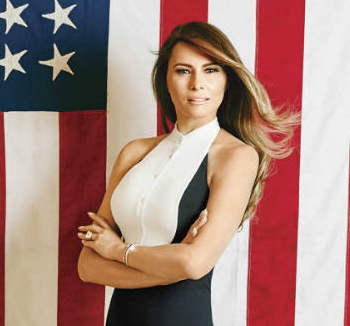 Meanwhile, First Lady-designate Melania is in a way different from previous first ladies who had held the position: She is the only first lady to have posed nude.

Born on April 26, 1970 in Slovenia (formerly Yugoslavia), Melania is 46 — meaning that there is a 24-year age gap to her 70-year-old husband — she was raised by her Communist party member father, Viktor Knavs, who managed car dealerships for a state-owned vehicle manufacturer, and her mother, Amalija Ulnik, a pattern maker at a textile factory. 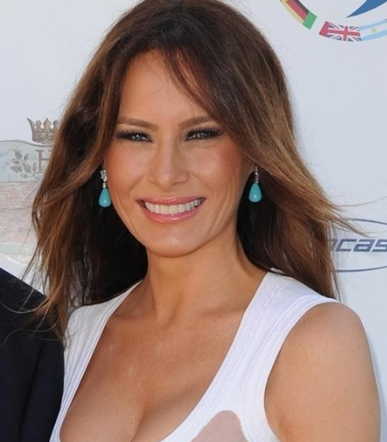 The First Lady-designate’s original name was Melanija Knavs, but she found fame as a model under the name, Melania Knauss.

After attending the Secondary School of Design and Photography in Ljubljana, the Slovenian capital, Melania enrolled in the University of Ljubljana, but dropped out a year later to pursue a career in modelling at the age of 16.

When she was 17, renowned fashion photographer, Stane Jerko, spotted her in Ljubljana as he left a fashion show and invited her for a trial photoshoot.

Her shoot with Jerko catapulted her into the spotlight, leading to a contract with an Italian modelling agency in Milan, Italy.

Since then, Melania has worked across Europe and has graced the world’s catwalks and magazines.

In 1995, Melania posed nude alongside for a French men’s monthly magazine. The “bombshell” photo set, obtained by the New York Post, shows her lying naked in a bed alongside Scandinavian model, Emma Eriksson.

An unnamed insider said Melania behaved “like a true professional” during the shoot and was “charming throughout.”

She once told GQ, “My mum was in the fashion business. I was five years old when I did my first catwalk and did commercials at 16. I went professional after my studies. My mum loved fashion. We loved to travel and go to Italy and Paris.”

Melania reportedly arrived in the US on an H-1B visa which, through a quirk in immigration law, admits models as highly skilled workers alongside scientists and computer programmers.

Trump is a fierce critic of the scheme and has vowed to rail against the “rampant, widespread H-1B abuse.”

She got her green card in 2001, though, making her a US citizen.

Melania met her future husband Donald at a Fashion Week party in New York City in September 1998, while he was still married to, but separated from, Marla Maples.

Trump was there with Norwegian cosmetics heiress Celina Midelfart but made a beeline for Melania and asked for her number. But, because he had a date, she refused to give it to him — and instead asked the billionaire for his.

She said later, “If I give him my number, I’m just one of the women he calls. I wanted to see what his intention was. It tells you a lot from the man what kind of number he gives you. He gave me all of his numbers.”

A week later, Melania called him and they began seeing each other, only to break up for a few months when Trump toyed with the idea of running for the US President in 2000 as a member of the Reform Party.

In 2000, Melania also gave a rare joint -interview with Donald to TV personalty, Howard Stern, telling the shocked jock, “We have incredible sex at least once a day.” Trump then boasted about how hot Melania looked in “a very small thong.”

Married twice before, Trump proposed at the glitzy Costume Institute Gala in New York and they married in January 2005 at The Episcopal Church of Bethesda-by-the-Sea in Palm Beach, Florida.

The reception was even attended by Hillary Clinton and her former President husband, Bill.

Melania gave birth to the couple’s only child, Barron William Trump, in 2006.

Continue Reading
You may also like...
Related Topics:melania trump