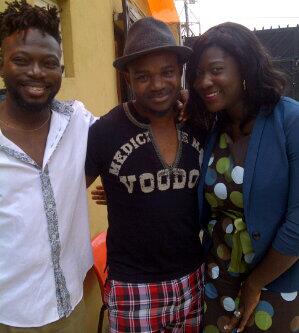 We learnt the actress and her husband donated an undisclosed amount of cash.

As we speak, Don Jazzy, Mercy Johnson and Ruggedman are the only celebrities who have donated to OJB Jezreel so far.

Out of the 16 million naira he needed for a life-saving Kidney transplant operation, he has only been able to raise N3 million so far.

In an interview on Tuesday, OJB said he only has 2 months left to live.

He is hereby calling on friends and well-wishers to contribute the highly needed fund for his kidney transplant surgery.

Wealthy singers like D’banj who recently bought a $25,000 suit of money, 2face Idibia and other popular celebs are yet to contribute to this ailing producer.

OJB was the man who mixed 2face Idibia’s popular African Queen song and yet 2baba hasn’t donated a dime to him.

Na wa for all these celebs ooo. They sabi show off for nothing.