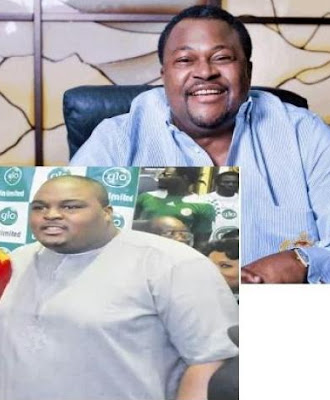 Eniola Adenuga, the son of Glo boss Mike Adenuga is engaged in a legal battle with his baby-mama, Maggie Ogun, over the custody of their 16-month old daughter.

In an affidavit filed in support of his motion for custody, Eniola Adenuga, who works at Conoil Producing Limited, said he started ‘an amorous affair’ with Ogun in October 2013.

He said she informed him in 2014 that she was pregnant with his child, after which he assumed responsibility for both Ogun and the unborn child.

In his statement, Adenuga said he paid for her ante natal care at Reddington Hospital, gave her N100,000 monthly and subsequently took her to London where she was delivered of the baby girl on October 23, 2014.

He also told the court on Friday, April 15, that he paid the bills worth 22,000 pounds but when Ogun returned to Lagos in January 2015, three months after her delivery, she denied him access to the child.

“I was denied access by the respondent to see my daughter on the ground that I was not interested in marrying her. I sought her understanding in this regard and reminded her of the fact that we had both agreed to end the relationship as it was heading to nowhere.”

Adenuga further stated that Ogun’s mother said he would only see the child if he marries her daughter and as such, he wasn’t allowed to see his child between March and October 2015.

He also recounted how once, when he was given access to the house, he found out that Ogun left his daughter in the care of a security man who doubled as houseboy/nanny and her grandmother, a septuagenarian.

“I was shocked at the unhealthy, unhygienic and unsafe environment in which my daughter was being brought up.”

He said he was only able to see his daughter when he organised a birthday party for her, and when he took her and Ogun to Dubai on holiday.

“On getting back to Nigeria, the respondent reverted to denying me custody and access to my daughter.”

“The respondent is unwilling to create time needed to care for my daughter physically, emotionally and mentally and I reasonably believe that my daughter currently lacks motherly attention.”

In her counter-claim, Ogun said she never denied Adenuga access to his child, stressing that between May and October 2015, she took her daughter to the Adenuga’s mother’s residence in Victoria Island every weekend.

Ogun said she also took the daughter to the applicant’s father’s house on Banana Island at least thrice a week and sometimes slept over.

She however, noted that the problem between them arose when Adenuga’s mother demanded that she and the daughter spend two weeks monthly at her residence – which her family refused because she was not married to Adenuga.

Ogun said they were in the process of resolving the issue when Adenuga, on October 13, stormed her home with a policeman, demanding that his daughter be produced, and in the process assaulted her mother and damaged her phone when she tried to record the scene.‎

Ogun also denied that her daughter is being brought up in an unhygienic and unsafe environment, stating that a doctor certified her daughter to be fit and healthy and that despite being born with a low birth weight of 2.7kg, her current growth pattern was more than satisfactory.‎

She further stated that Adenuga ‘is not suited to cope with the demands of having full custody of a 16-month old female child’ as ‘he does not have a definite schedule and comes home by 12’.

In its ruling, the Igbosere Magistrate’s Court in Lagos, granted custody rights to Adenuga, as Chief Magistrate O. A. Ogunbowale dismissed Ogun’s objection that Adenuga cannot take adequate care of the child.

The magistrate ruled: “Consequently, the applicant (Adenuga) is hereby granted an overnight access to the subject (child) every fortnight from 8 am on Saturday to 12 noon on Sunday.”

Although the magistrate said the order took effect from March 16 and would subsist until the case is determined, Ogun has sought the court’s leave to appeal the order.

Her lawyer, Marian Jones of the International Federation of Women Lawyers (FIDA), has applied to the magistrate for leave to appeal the ruling.