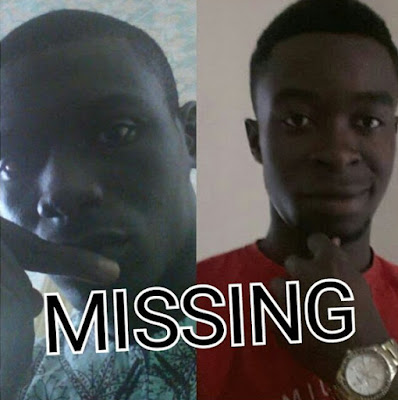 2 undergraduates, Samuel Eke (25) and Robert Akinduro (26), declared missing at the Osun State University, since Monday last week are yet to be found.Eke and Akinduro are 400 level Computer Science students at the university before they got missing last week. It was learnt they had left their hostel at Suzy area to Citadel Hostel about 11p.m. on Monday, but never returned.

They had not been seen by their parents, fellow students and relatives till date. The President, Nigerian Association of Computer Science Students (NACOSS) in the university, Mr. Yusuf Oluwakalo, said Eke and Akinduro were said to have gone to Citadel Hostel to sort out their project issue but did not reach the hostel.

Akinduro added that since they were nowhere to be found and their parents never saw them, the institutions authorities had reported the matter at Okebale Police Station. “Subsequently, the matter has been reported to the Commissioner of Police in Osun, Mr. Femi Oyeleye.”