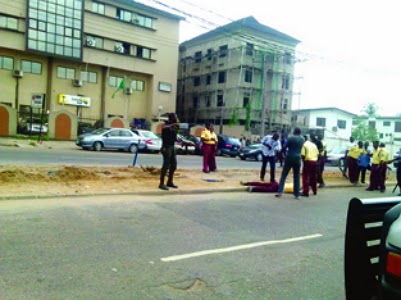 The Mobile Policemen attacked three LASTMA officials who were carrying out their legitimate duties on Ashabi Cole Street, off Lateef Jakande Road, Agidingbi, Lagos State, Southwest Nigeria, at about 3:13 p.m., leaving one of the victims unconscious and rushed to a hospital.

According to an eye witness, who identified herself as Omolola Amusa, “trouble started after a minor argument over why they have to tow away the car that was causing obstruction on Ashabi Cole Street. The policemen said the owner was inside the bank and did not allow the vehicle to be removed. All of a sudden, one of the police officers gave a LASTMA official a head-butt and then used the butt of his gun to hit him on the head again. The LASTMA official collapsed and became unconscious.

“When the other LASTMA officials tried to rescue their colleague, it became a free for all and the policemen started shooting in the air to scare people around.”

Another witness who did not want his name mentioned said it was really unruly on the part of the two law enforcement agents to have engaged in a public show of same.

When P.M.NEWS asked the leader of the LASTMA team to explain what happened and the fate of his injured colleague, he merely said the victim was receiving treatment in an undisclosed hospital. He also refused to disclose the identity of the victim.

Efforts to speak to the police officers involved in the incident proved abortive as they ordered our reporter to leave the scene.