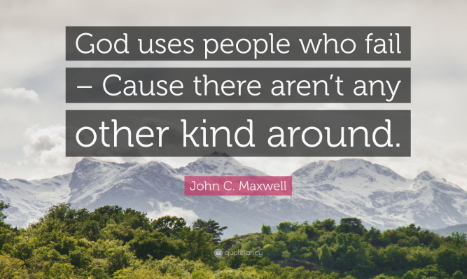 “But he said to me, ‘My grace is sufficient for you, for my power is made perfect in weakness.’ Therefore I will boast all the more gladly about my weaknesses, so that Christ’s power may rest on me”- 2 Corinthians 12:9

“God uses people who fail – Cause there aren’t any other kind around”-John C . Maxwell

One of the most inspiring motivational speakers of all time, the late Myles Munroe, some years ago went down memory lane to describe how a supposed weakness turned his life around by being a spring board for him into national and international limelight. Myles was labeled a talkative when he was young, to the extent that he got sent off from the dining table as a punishment for his unbridled tongue. Every attempt to stifle this unrestrained vice in him made little or no headway as he later talked and walked himself into becoming an international speaker. He once said, “My parent did everything to stop me from talking. I was becoming both an embarrassment and a nuisance to my community but it is amazing today that people now pay me all over the world just to come and talk!”

This write-up is not a lazy and flimsy call for us to excuse and indulge our weaknesses or flaws. Infact, we must keep evolving a better ‘us’ in order to become relevant in life, but there is a sober truth that I have come to realize in life: that there are some flaws that are customized for us; they are significant to our destination! They are called ‘Perfect Flaws’. Before I go into my lead figure, Albert Einstein, for this write-up, I will love to share a story that will drive in my point of view clearly. The story is an Indian tale captioned, The Broken Pot.

A water bearer in India had two large pots, each hung on an end of a pole which he carried across his neck. One of the pots had a crack in it, and while the other pot was perfect and always delivered a full portion of water at the end of the long walk from the stream to the master’s house, the cracked pot arrived only half full. For a full two years this went on daily, with the bearer delivering only one and a half pots full of water in his master’s house. Of course, the perfect pot was proud of its accomplishments, perfect to the end for which it was made. But the poor cracked pot was ashamed of its own imperfection, and miserable that it was able to accomplish only half of what it had been made to do. After two years of what it perceived to be a bitter failure, it spoke to the water bearer one day by the stream.

“I am ashamed of myself, and I want to apologize to you.”

“Why?” asked the bearer. “What are you ashamed of?”

“I have been able, for these past two years, to deliver only half my load because this crack in my side causes water to leak out all the way back to your master’s house. Because of my flaws, you have to do all of this work, and you don’t get full value from your efforts.” the pot said. The water bearer felt sorry for the old cracked pot, and in his compassion he said, “As we return to the master’s house, I want you to notice the beautiful flowers along the path.”

Indeed, as they went up the hill, the old cracked pot took notice of the sun warming the beautiful wild flowers on the side of the path, and this cheered it on. But at the end of the trail, it still felt bad because it had leaked out half its load. The bearer said to the pot, “Did you notice that there were flowers only on your side of your path, but not on the other pots side? That’s because I have always known about your flaw, and I took advantage of it. I planted flower seeds on your side of the path, and every day while we walk back from the stream, you’ve watered them. For two years I have been able to pick these beautiful flowers to decorate my masters table. Without you being just the way you are, he would not have this beauty to grace his house.” The cracked point became so happy that it wished it could leak out the more! Since that day onward, the leaking pot became so fulfilled having realized how its own leakages had brought much beauty to its bearer’s master.

Each of us has our unique flaws. We’re all cracked pots. We need to allow the Lord to use our flaws to grace His Father’s table. In God’s great economy, nothing goes to waste. Either as a teacher, a coach, an entrepreneur, a manager, a husband, a wife or a leader, we must learn how to see the uniqueness in people. We must maximize people’s flaws by putting them in places where their flaws can be turned into fortune!

One of the greatest scientists of all times, Albert Einstein did not have a rosy walk to stardom. Albert Einstein was unable to talk until he reached the age of 4 and even when he started talking, he was slurry and incoherent in speech. When the professor who revolutionized physics with his General Theory of Relativity was 16 years of age in 1895, Albert Einstein’s teacher said to his father, Hermann Einstein:

“It doesn’t matter what he does, he will never amount to anything.” This was a damning report from the head of his Munich school. As a child, Albert Einstein’s teachers thought he was mentally retarded and they tagged him a nuisance in virtually all of the classroom activities. Within ten years of this woefully inaccurate prediction, Albert’s colossal intellect was already beginning to unlock the secrets of the universe.

In time, he became the foremost mind of the twentieth century. Einstein, who died in 1955, aged 76 after a career garlanded with honours including a Nobel Prize in 1921, clearly took the criticism on the chin. By the time he died, he became the most famous scientist of all time and his name became synonymous with the word, genius. So, what happened to the critics who said he was mentally retarded and would never amount to anything? Well, nobody knows what happened to them, since nobody bothers to remember them! No wonder the reason for one of his wonderful quotes: “Great spirits have always encountered violent opposition from mediocre minds.”

When Albert Einstein died of an abdominal aneurysm in 1955, his brain was removed within seven and a half hours of his death by Dr. Thomas Harvey, a pathologist at Princeton University. The story of what happened to Einstein’s brain over the past 60 years, and what today’s science tells us about the cause of his genius, is fascinating. A team of researchers at McMaster University in Canada made the shocking discovery that a portion of Einstein’s brain called the parietal operculum region was vacant! The researchers speculated that this vacancy actually allowed his thoughts to “see” each other, rather than “speak”, which backs up Einstein’s own claim that he was a visual thinker, not a verbal communicator.

It was later verified that the “flaw” in Einstein’s brain contributed to his ability to understand complex scientific problems. It became obvious why he began speaking late, sometime after age four, and remained inarticulate and possibly dyslectic through his early school years. From a neurological standpoint, Albert Einstein’s brain was tagged a ‘flaw’; while others believed that his brain was divinely tinkered with. Though the flaw affected his speech and sense of coherence when he was small, but the same flaw eventually became the secret of his awesomeness, making him an unprecedented phenomenon and genius.

Instead of getting mad at some of our weaknesses, we are to find the perfect use for them and that is why I call them “Perfect Flaws”. As a youth specialist, relationship expert and entrepreneurship coach, I have realized that the best way to make people productive and fulfilled is to put them in their areas of gifting. Myles Munroe once said, ‘’To know the right places for people, we must know their area of gifting.’’

The African youths are not a misfit or liability in the society. We are ‘dynamites’, we are full of potentials and gifts. it is just that our energy is not being put into proper use. As the Serenity Prayer goes: God grant me the serenity to accept the things I cannot change; courage to change the things I can; and wisdom to know the difference. Embrace your perfect imperfections!