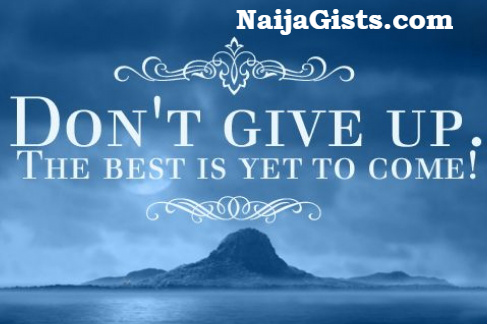 Have you ever felt like giving up? Those are the times when you ask yourself the question, “What’s the use?” There are times in the best of lives, when the temptation to quit is overwhelming. Everyone wants to succeed at the goals, which they establish. We are encouraged when there are indicators that our efforts are not in vain.

Nothing is more discouraging then a series of failures, defeats, and setbacks. Those are the times when we are overwhelmed with the odds in life that we feel like giving up. As in the sport of boxing, when the corner of a boxer feels their boxer can not continue, they signal defeat by throwing a towel into the ring. I attest, in personal witness, many otherwise confident Christians, find themselves throwing in the towel when they face odds that seem unbeatable. What generates this feeling more than anything else are tough situations that seem unsolvable and irresolvable despite our best efforts.

Dealing with tough situations takes a whole lot of adjusting. Some folks never get ready for tough times and they simply throw in the towel.

Consider if you will a story I heard once about when the devil decided to visit the church…Some have been through so much they can stand just about anything!

As Believers, we are comforted to know that if we stand for that which is right; our battles are God’s battles. We are not lonely soldiers standing isolated on the battlefield, but we have the knowledge of knowing that our God joins us in our struggles, and promises us the victory through His power.

Are you facing a time of trouble? Don’t throw in the towel, because, “…in the time of trouble He shall hide me in His pavilion. In the secrets of His tabernacle shall He hide me!”

– Are you feeling helpless? Don’t throw in the towel! Say like David, “I will lift mine eyes to the hills from whence cometh my help, my help cometh from the Lord who made the heaven and the earth!”

– Are you feeling alone? Don’t throw in the towel! Jesus said in John 14:18, “I will not leave you comfortless. I will come to you!”

– Are you feeling trapped with no way to turn? Don’t throw in the towel, because the Lord will make away out of no way!

– Are you feeling weighed down by a heavy load? Don’t throw in the towel! Take your burdens to the Lord and leave them right there. Jesus said, “…my yoke is easy and my burden is light!”

– Are you feeling overwhelmed by the odds?” Don’t throw in the towel! I hear the word declaring, “He that overcometh, shall inherit all things!”

Do you feel like giving up and just want to throw up your hands! Don’t throw in the towel! Instead of throwing up your hands, say, “Father I stretch my hands to thee, no other help I know. If thou withdraw thyself from me, whether shall I go!”

Don’t throw in the towel, but get ready to praise the Lord! Israel praised the Lord for the victory that was on the way! Praise God for the blessing that is on the way! When praises go up, the blessings come down!

· Shout because God is still on the throne!

· Shout because God sent His Son to command the outcome of our battles!

· Shout because Jesus demonstrated that we might have our Garden of Gethsemane’s!

– Don’t throw in the towel, call on Jesus!

– Don’t throw in the towel, trust in the Lord!

Continue Reading
You may also like...
Related Topics:give, motivation, quote, up