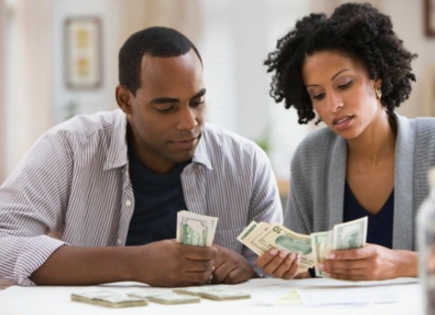 January 2nd, 2016 – Money Can’t Buy Love: Why A Woman Should Never Given Her Money To A Man

Today we will be discussing a very contentious topic, “to fund or not fund”. It might seem like a tricky question but it is never a good idea to buy love, especially if you are a woman. Why on earth should a woman give a man (who is not even her husband) her money?

Not a good idea at all! Back in the day, men took care of their wives and families, and ruled their households like mini fiefdoms. Times have changed, and women now make their own money, but men still expect us to submit, so what do we do? We submit, if only for the sake of peace. However, if a woman has to foot the bill, she has become the boss, not just a helpmate. So why do I think so?

1.The man was designed to be the head in every marital/amorous relationship, and if he is the leader, he should foot the bills (or at least a large part of it). Why? Because money is power, whoever has it controls the power dynamics of the relationship. In all my years, I am yet to come across a man who is happy to be fed or funded by a woman, they might date (or even marry) a woman for her money, but trust me more often than not they will find a less financially buoyant woman to spend their change on, so as to feel like men.

2. Giving a man your money puts you at risk of attracting gold diggers/gigolos. Only yesterday, I read the story of a divorced silver spoon celebrity chick. She said, “I really loved him, but when I had a financial challenge, he took off. Apparently, that was all he wanted.” Guess what, the guy in question is remarried to a younger woman today.

3. You can never really tell if it is you he loves or your money. Modern females are educated and independent, but marriage demands that we submit to our man. How does a person submit to a man one is feeding? More often than not, such women become / are accused of being shrewish, and the men feel justified in taking off. What about an old friend of mine who dated a guy while she was putting herself through the university.

She would feed him, and spend her heard earned savings on him, guess the first thing he did after he graduated? That’s right, he dumped her. Obviously he never loved her, only her money. My advice? Do yourself a favour, and find yourself a man who has a job. Oh, and just in case he attempts to turn you to his ATM; dump him.

[By Jane Akolade, The Nation]