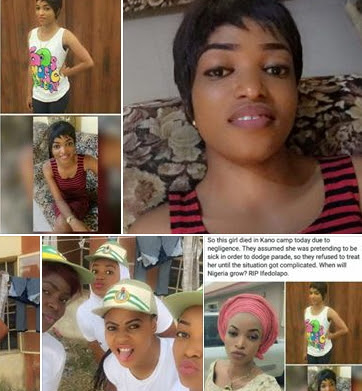 December 4, 2016 – Mother Of Female NYSC Corps Member Who Died At Kano Camp In Coma, Sister Says She Has Asthma

Miss Oladepo passed away in a controversial circumstance, a development her elder sister, Mrs. Abimbola Oyeyode said had left the family more devastated than anyone could ever imagine, particularly their mother whom she said had been in and out of coma since the sad news was broken to her in the early hours of last Tuesday.

Oladepo who left Osogbo, Osun State for Kano penultimate Thursday for her youth service, was said to have taken ill on Monday and died later in the day. The deceased reportedly complained of ill-health and was taken to a clinic but was allegedly not accorded urgent medical attention until her condition deteriorated.

Speaking in an interview with Sunday Sun, the deceased’s sister, Mrs. Oyeyode said although Ifedolapo was asthmatic, she left home hale and hearty. “She was hale and hearty before she left Osogbo on Thursday. She visited me on Wednesday, preceding her journey to Kano. We played together and even ate together. Although she used to be asthmatic, it has been long she had any attack. The last time she had an attack was about five years ago but we intentionally gave her a medical report so that she won’t be given too much stress. It wasn’t that she showed any sign of illness.

The late Oladepo was said to have arrived the camp on Thursday and had remained in touch with her elder sister until about five hours before her sudden demise. “she got there on Thursday and we have been keeping in touch. She shared her experience and impression about the camp with me. That was from Thursday to Sunday. But on Monday morning she called me and told she was not feeling fine. She said she was having symptoms of malaria and I advised her to go to the clinic. But when she got there she was not taken seriously because according to her, they said she was feigning sickness because she didn’t want to go for parades. She was left unattended to until some hours later when it dawned on them that she was in serious pains,” she revealed.

About 3.15 am on Tuesday, a nurse called me to break the news of her death to me. I was almost in Kano when the call came. I had left Osogbo at 5.00pm when she told me that she was not being attended to.

“My mum is in and out of coma. She was mummy’s best friend. She is currently on admission now. She is being given sleeping medication. She is threatening suicide because she said she cannot live without Ifedolapo. As for my dad, the fact that he is a man makes him to take it much easier than my mum.

Continue Reading
You may also like...
Related Topics:mother of nysc corper