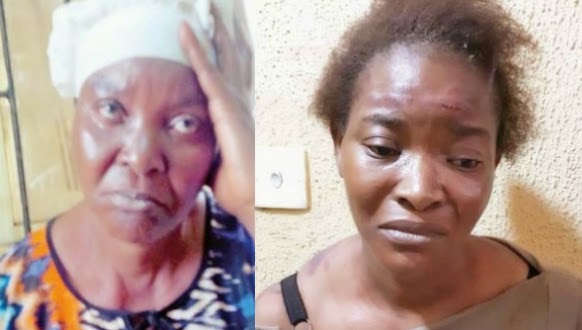 In an exclusive encounter with Funmi­layo’s mother, Prophetess Esther Adeyemi at the police station, she looked visibly shocked at the confession of her daughter on TV. She stormed Lagos police command, Ikeja to con­firm that the suspect being paraded on TV was actually her first child, Funmilayo.

Prophetess Adeyemi claimed that her visit to the police station to identify the suspect on Monday was the first time she was seeing her daughter since she left home in 2005.

“She told me that she was going back to school and never came back home. She left us eight years ago. They kidnapped and hypnotized my daughter”, she lamented.

Mrs Adeyemi said she had borne the bur­den of training Funmilayo and three others all alone ever since their father died in the 90s. “All has always been well till their fa­ther died. He was killed during the Ife and Modakeke fight. During that time, we were based in Calabar and as expected we were evicted from the barracks and we relocated to Osun State.

“He died as a Chief Superintendent of Police. Luckily, I am a prophetess and I de­cided to embrace my ministry. I had to get closer home and most importantly close to the mountain. By the grace of God, I became popular in Lagos and Ajah.

“As the first daughter of the house, I want­ed the best for her, so I invested in her edu­cation. She got admission to study Survey at Osun Polytechnic. After her graduation, she worked briefly as a receptionist till one day in 2005, she came to me that she wanted to go back to school for her HND.

“I gave her enough money to sustain her for months. This was the last I heard from her. I was worried but anytime that I attempted to call the police, she will call her sister and tell her that she is fine. This always happened anytime I go to the mountain to pray. She is 35 years and old enough to be a mother but I never knew that I had four grandchildren from her,” Mrs Adeyemi narrated.

When asked why she did not use her gift of prophecy to find her daughter, Mrs. Adeyemi said: “I never knew that she was lost, so I did not bother focusing my prayer on her.

“I felt that she is an adult and should be al­lowed to live her life. Most especially, since she gets in touch with her sister, I felt no need to worry. The only time I spoke with her, she said that she was in South Africa.”

She called on the Orekoya family and oth­ers who have fallen victims of Funmilayo’s kidnap syndicate to forgive her daughter as she was hypnotized. “They kidnapped my daughter and placed her under a spell. What sort of human being from a Christian back­ground will suddenly decide to sell their soul to the devil?

“Please, forgive my daughter and give me the chance to break the spell. You all heard that she claimed that she wanted to expand their family wealth. Which normal woman would be working for a man who has refused to marry her after four children? Please, have mercy on my daughter. I thank God that none of the kids died in the process,” she pleaded.

How she learnt about her arrest, Mrs. Adeyemi said that it was her little daughter that tried to draw her attention to the news on social media. “She called me that a lady who looks like my daughter is on her whatsapp. I waved it aside till I saw her pictures every­where. It was a great shock. I prayed for the ground to open and swallow me. The shame was too much but no matter how bad a child turns out to be, a mother cannot abandon him or her. I am ashamed but all the same I thank God that she is truly alive.

“It could be God’s way of rescuing my daughter from the hands of those criminals. She is under a spell and almighty God will help me deliver her,” Mrs Adeyemi stated.